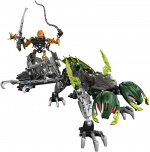 Several Spikit were held in captivity in pens in Roxtus and kept in near-starving conditions. Skrall who failed to perform their duties were reassigned the punishment of feeding the Spikit, a task which often resulted in the Skrall being eaten as well.[2]

A caravan of Ice Agori used a Spikit to pull them and their wares to trade with Tajun. When their escort, Gelu, spotted the Bone Hunter Fero in the distance, he sent the caravan into a sandstorm to hide them while he fought Fero.[3]

Metus, arranging a convoy from Iconox to Vulcanus, acquired a Spikit to pull a heavy caravan full of Exsidian. When the caravan was attacked by a group of Dune Snakes, the Spikit panicked, but was calmed by Kirbold. After falling down the Dark Falls, the Spikit survived, and ran off. Another Spikit and caravan was acquired from Roxtus for the convoy to use.[4]

Spikit possess massive strength, which is usually put to use by the Agori by having the Spikit pull wagons and caravans. Spikits' two heads work in concert to provide one mind.[5][6] If one of a Spikit's heads is cut off, it can largely recover because the remaining brain can gradually take over many of the functions of the lost one.[7] Spikit are naturally claustrophobic.[4] 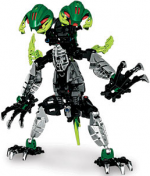