"Behind them, the Skrall fortress burns, the last remnant of their empire in the north. What it has taken them thousands of years to build, the baterra have destroyed in weeks."
— Narrator, Fall and Rise of the Skrall

The Skrall Fortress was a fortress the Skrall used as a base. 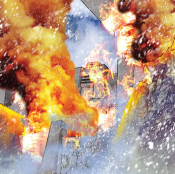 The fortress burning down

A large number of Skrall were cut off from their homeland after the Shattering, and set about conquering the northern region. In the tens of thousands of years that followed, they built a new empire, including a massive fortress. The legions took up residence in the fortress, while others lived in outposts. Tuma, a leader-class Skrall and commander of a legion, kept his forces confined to the fortress, sending out small search parties to forage for food in the harsh climate.

One party, led by Branar, returned with slaughtered warriors and reports of mysterious assassins. Tuma organized his troops after discovering that all other outposts had been destroyed, and set out to combat them. The killers, soon discovered to be shapeshifting machines dubbed Baterra, decimated the legion, forcing the survivors to hole up in the fortress. The Baterra eventually sneaked in disguised as firewood, ransacking the fortress. Tuma had the fortress set on fire to deter the Baterra's approach, and moved his legions south, through the Black Spikes and towards the wastelands of Bara Magna.

The fortress was situated between two mountains, in an unstable region north of the Black Spike Mountains.