The Baterra are a group of violent shapeshifting robots created by the Great Beings.

When the Shattering took place, many Baterra were in the desert region of the planet, which during this time broke off and formed a new planet called Bara Magna. Some Baterra were stranded on Bota Magna.[6] 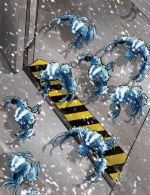 The Skrall were eventually cut off from their supplies, and planned a last attempt at a defense. While the Skrall were fortifying their base, Baterra disguised themselves as stores of wood, which were taken inside the garrison. Successful in their deception, they proceeded to ransack the fortress and kill many more Skrall. Tuma ordered the fortress to be set on fire and, to escape total annihilation, organized the Skrall to migrate south and occupy the city of Roxtus.[7]

The Baterra continued to reside near the Black Spike Mountains. In attempt to determine their migratory patterns, the Skrall conducted monthly patrols. During one of these, Branar brought a soldier with him to herd Vorox, as was usual in the practice. Nearby Baterra quickly killed a Vorox and slaughtered the soldier, leaving Branar alive to report the incident.[8]

A group of Baterra were observed shapeshifting near the banks of the River Dormus by the Agori Crotesius, Tarduk and Kirbold on their journey northward to discover the secrets of the Red Star.[9][10] Because the villagers were not wielding weapons at the time, the mechanical beings ignored them.

Aware of Tuma and Stronius returning from a meeting with the Sisters of the Skrall, the Baterra uprooted several trees, and placed them along part of the path they were traveling. They then disguised themselves as rocks, and waited for the two Skrall to arrive. When the Skrall reached the area, they assumed the extra trees were Baterra, and readied their weapons. Just as they realized that the trees were decoys, two Baterra took the opportunity to strike, hitting Tuma in the back.[11] The Skrall were knocked unconscious, but Metus arrived soon after, and hid the Skrall weapons. The Baterra, not perceiving a threat in the area, remained where they were. Metus dismissed them shortly after the Skrall woke up, and the machines departed the area.[12]

The Baterra continue their advance towards the south of Bara Magna.[13]

The Baterra are entirely mechanical, programmed to instinctively target and kill all beings carrying weaponry, and do not attack anyone unarmed.[12] They are not made of protodermis.[14]

Baterra in their default forms, building the Valley of the Maze

Baterra have the ability to shapeshift like liquid metal[15] and completely alter their appearance. They do not shapeshift to resemble specific individuals as the Baterra are designed to ambush rather than to spy.[16] Rather, they often use their powers to camouflage themselves.

In their default form, Baterra are silver in color and roughly the height of a Bohrok.[17] Baterra do not have individual names and likely communicate through subsonics.[18]

The Baterra possess bladed weapons that are attached to their body. These weapons can transform with the Baterra.[7]