Atakus lived on Spherus Magna under the governance of the Element Lord of Rock. Before the end of the Core War, Atakus came to serve a Great Being with a plan to rule Spherus Magna once it was restored by Mata Nui.[1] This Great Being gave Atakus communication technology so that Atakus could supply him with information while the Great Being, taking the name "Velika", hid himself in the Matoran Universe.[2]

During the baterra attacks, Atakus worked in a Skrall Fortress ruled by Tuma in the northern Black Spike Mountains. He was a gate guard, and allowed the admittance of a supply wagon with tree trunks to be used for fire wood; however, the wood was actually a number of disguised baterra, which attacked and overran the fortress. After the subsequent battle, Atakus took charge of the surviving Rock Agori and led them south in the wake of the retreating Skrall army.[3]

At some point, the Skrall uncovered a weapons cache that they attributed to the baterra. Velika helped Atakus obtain a pair of glowing Skrall Tribal Design Blades from this cache.[3][4][5]

Once the tribe had settled in Roxtus, Atakus took on several jobs. Firstly, he acted as an assistant to Skrall competing in Arena Matches. He also continued to his old job of gate guard, and became a spokesman for Tuma to Agori from other tribes. Atakus once made contact with an Agori captive of theirs, Metus, who offered his assistance in the Rock Tribe's struggles. Tuma was initially doubtful, and Atakus was assigned to test the Agori's loyalty.[3]

Atakus was assigned to accompany a Skrall to an arena match in Vulcanus. After winning the match, the Skrall left to meet with Metus, while Atakus returned to Roxtus.[6]

While in Roxtus, he was approached by an Agori sent by Raanu to gain the Skrall's assistance in fighting against the Bone Hunters. Atakus openly mocked the Agori's attempts to gain the trust of the other villages and told him that the Skrall's loyalty was temporary and for sale. After paying with a large amount of Thornax, the Agori received Atakus' Mark, allowing him to find a Skrall and purchase its seal, proof of their new contract to fight for Vulcanus.[7]

Atakus allowed a caravan containing food and water into Roxtus, not knowing Strakk and Gresh were hiding in the cart. After some Spikit were released in Roxtus by the two, Atakus decided to stay at the village's entrance to stop the creatures from escaping, but was left unconscious when Strakk fell on him.[8]

With the use of the Prototype Robot, Mata Nui succeeded in his mission, and restored Spherus Magna. Atakus now resides on the planet once again.

Atakus idolizes Stronius, and spent most of his free time with the elite warrior, hoping to pick up combat techniques. Stronius tolerated his presence, and sometimes had Atakus torture captive Vorox.[3] 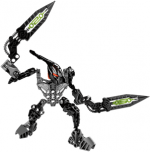