The Valley of the Maze, sometimes more simply referred to as the Maze Valley, is the site of an ancient fortress of the Great Beings on Bara Magna.

The tower fortress of the Maze

At one point in history, the fortress in the Valley of the Maze on Spherus Magna operated as the headquarters for all known Great Beings. Here, the Great Beings forged the Kanohi Ignika, as part of the failsafe for the Great Spirit project, using the immense heat of the fortress's forges.[1] The Red Star was also created here.[2]

During the last stages of the Core War, the Great Beings ordered the Baterra to construct an impenetrable labyrinth around their fortress complex,[3] designed to keep the Element Lords from acquiring the power source housed inside.[4]

The fortress was abandoned by the Great Beings immediately before the Shattering, after which it became part of the planet known as Bara Magna.

During the Baterra's assault on the Skrall following their migration through the Black Spike Mountains, pivotal battles between them were fought in the Valley of the Maze. These nearly always ended in victory for the Baterra, which incited the Skrall to venture further south.[5]

After the meeting held between the Sisters of the Skrall and Tuma and Stronius, the female Skrall agreed to travel to the Valley of the Maze and break into the tower fortress in the hopes of finding the Great Being Angonce and receiving greater psionic powers from him.[6]

Mata Nui ventured to the Valley of the Maze, following the second expedition of the Jungle Agori Tarduk, to obtain knowledge required to reclaim his position as Great Spirit of the Matoran Universe. Traveling through the labyrinthine defenses of the maze, he encountered elementally powered traps and automated Thornax Launchers loaded with artificial Thornax.[7] He destroyed a dead end using his Scarab Shield. Finally arriving at the fortress at the maze's center, Mata Nui resolved to gain entry.[7]

As Mata Nui vocalized his frustrations at his difficulty in entering the fortress, a voice asked him three consecutive questions posed as a riddle. After hours of deliberation, Mata Nui was able to correctly divine the answers: Unity, Duty, and Destiny. A doorway appeared in the otherwise featureless structure, and Mata Nui descended the winding staircase behind it until he arrived at a chamber containing a lake of lava, finding Tarduk suspended upside down above it.[8] 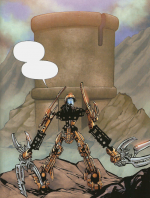 Mata Nui in the center of the Maze

Mata Nui rescued the Agori, but had to flee as the chamber began to collapse. As they watched from the outside, Mata Nui realized that what while what was emerging had every semblance of a volcano, including lava, it was a creation of the Great Beings. He scaled the rock and began destroying it until a door was revealed on its hidden metal surface. Within, Mata Nui discovered blueprints for his old body, as well as a screen outlining his purpose of reuniting Spherus Magna. He also learned that a second robot was originally intended to be built, although the Great Beings failed to do so. Tarduk, who had entered the structure against Mata Nui's orders, then reminded him of the ancient, broken robot to the south, and encouraged Mata Nui to search for a power source within the volcano.[8]

Within the Great Volcano, Mata Nui found a metal box containing the power source that could be used to recharge the robot that the Agori had turned into their home. He departed the maze and returned south to take control of the robot.[8]

In another alternate timeline, Mata Nui's mission was never interfered with by the Brotherhood of Makuta. He returned to Bara Magna and journeyed to the Valley of the Maze, where power was returned to where it belonged.[9] 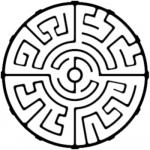 The symbol for the Valley of the Maze

The Valley of the Maze is nearly featureless, other than the maze itself, which rises from the ground in the visual pattern represented on Saw Blade Shields.[7]

The Great Volcano is an artificial volcano at the center of the maze that serves as a power plant.[8]