"The evil that visited Ga-Koro across the waves has come, it seems, to our ocean of sand."
— Turaga Onewa, Mata Nui Online Game

The Motara Desert was a desert covering the vast eastern portion of Po-Wahi on the island of Mata Nui. 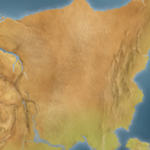 The Motara desert viewed from above

The Motara Desert was brought into being when the Great Spirit Mata Nui's camouflage system was accidentally activated during the Great Cataclysm, creating the island of Mata Nui. Included in its expanse was the village of Po-Koro, home of the Po-Matoran, the Po-Wahi Quarry, and many great mountains and canyons. The desert was also home to many Rahi, such as the Sand Tarakava and Mahi.

When the Toa Mata arrived on Mata Nui, Toa Pohatu's Toa Canister landed on the beaches of Leva Bay. A dock was also on its eastern coast for transit between Ga-Koro and Po-Koro. From this dock was a road that led to Po-Koro and the Quarry.

Toa Nuva Tahu and Lewa, accompanied by the wandering Av-Matoran Takua and Ta-Matoran Jaller, traversed the desert on their search for the beings responsible for the theft of the Nuva Symbols. Following tracks left by the Bohrok-Kal, the company encountered Pohatu, to whom several Mahi had been magnetized. After Takua and Jaller removed the goat-like Rahi, Pohatu joined the party.

The desert was cleared by the reawakened Bohrok swarms, and wiped from existence by the Great Spirit Mata Nui's reawakening.