"As I stare at the sundial, I suddenly have an idea. I take out my Lightstone and cast its light upon the gnomon such that its shadow falls upon what I believe to be the number four. At first, I don’t think it is going to work, but then the dial begins to glow. Soon, the sundial has disappeared and a spiral staircase further down into the depths appears in its place."
— Takua's thoughts, Mata Nui Online Game

The Sundial Entrance was the entrance to a passageway from the island of Mata Nui to Mangaia.

The bottom of the cylindrical passageway 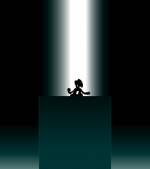 Takua traveling down the passageway

The entrance was located at the bottom of Shaft B of the Great Mine, covered by the enigmatic Great Sundial. When unlocked, the cylindrical passageway within served as a one-way elevator from Onu-Wahi to the lair of Makuta Teridax inside the Matoran Universe.

Shortly after the coming of the Toa Mata, the wandering Av-Matoran Takua managed to open the entrance using a Gnomon and a Lightstone. Upon activation of the passageway by means of shining a Lightstone on the four o'clock marking of the sundial, the markings disappeared and the passageway was unlocked. At the bottom of the spiral staircase, the image of a golden Hau hovered above a small pedestal. After the Toa Mata entered Mangaia through the Kini-Nui's Suva-Kaita, the Golden Mask disappeared, and the Great Mine was abandoned by miners fearing that the entrance led to Makuta's lair. After being informed by Onepu and Turaga Whenua, Takua returned to the derelict entrance. Depressing a button on the now-vacant pedestal, the Matoran activated a mechanism which lowered the floor of the chamber down to Mangaia's surface.

During the Great Spirit Mata Nui's re-awakening, the area of the Great Mine surrounding the entrance was destroyed.