"Three shall become Wairuha, and walk the path of wisdom."
— Toa Kaita Akamai to Toa Mata Gali in a vision, Triumph of the Toa

Wairuha was a Toa Kaita, a powerful being who was created by the merging of the Toa Mata Lewa, Kopaka and Gali. After the three became Toa Nuva, their fusion instead created the Toa Nuva Kaita Wairuha Nuva.

When Toa Gali was struck by a Tarakava and knocked unconscious, Wairuha and Akamai appeared to her in a vision, informing her of their future existence.[3] Toa Kopaka received the same vision after accidentally knocking himself unconscious on a lava lake, but his focus shifted and he did not witness the whole vision.[4]

Wairuha was formed alongside Toa Kaita Akamai when the Toa Mata were attacked by a pair of Manas crabs.[4] The two brother Kaita began to fight the Manas, but were at a disadvantage until they realized the energy towers in Mangaia were giving off heat that was sustaining the Manas. They smashed the towers, causing the Manas to enter a frozen state. The Kaita continued towards Teridax, but were forced to split apart from his shadow powers.[5]

Lewa, after failing to steal a Krana-Kal from the Kohrak-Kal, was discovered by Gali and Kopaka, who helped him recover from his injuries. Gali suggested that the three Toa form a Toa Nuva Kaita in order to combat the threat.[6]

The Toa approached Kohrak-Kal, and merged their bodies and minds to form Wairuha Nuva. The Kohrak-Kal summoned Lehvak-Kal and Gahlok-Kal to its aid, and fused to form the Bohrok-Kal Kaita Ja.[7] The Ja combined its powers and flung them at Wairuha Nuva, striking him with the merged powers. The overwhelming pressure was too much for Wairuha Nuva to endure, and he dissolved into the three Toa Nuva.[6] 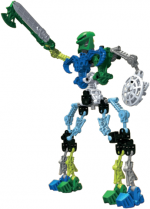 Wairuha commanded the Elemental Powers of Air, Water, and Ice, like the Toa that comprised him. He could wield these in any combination. Wairuha's fighting style utilized instincts, impulses, and logic.[8]

As a Toa Nuva Kaita, Wairuha had a stronger command of his Elemental Powers. However, when the Nuva Symbols of his component Toa Nuva were taken from their Suva, Wairuha also lost his command of these powers.

Wairuha Nuva wears the Kanohi Rua Nuva, Great Nuva Mask of Wisdom, which contains the Kanohi Nuva powers of Levitation, Water Breathing, and X-Ray Vision. He also wields a double-bladed sword composed of both of Lewa Nuva's Air Katana in his right hand, and a two-ended axe weapon made of Gali Nuva's Aqua Axes in his left.

Wairuha Nuva would have access to the abilities of the Adaptive Armor.[9] 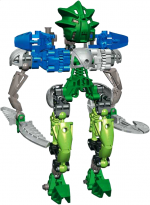 Wairuha could be built out of the Toa Mata canister sets Lewa, Kopaka, and Gali. Instructions were divided between the three sets' instruction booklets. In the set, Wairuha wore Lewa's green Kanohi Miru, although in story his mask is a silver Rua of the same shape. A gear situated behind either shoulder could be turned to swing the corresponding arm. Another gear on the lower torso caused the legs to swing alternately, producing a running motion.

Wairuha Nuva can be built out of the parts of the Toa Nuva canister sets Lewa, Gali, and Kopaka. The instruction booklets for his components each feature a section of Wairuha Nuva's instructions in the back. A gear on each of his shoulders causes the corresponding arm to swing back and forth. Although each of the component Toa includes one ball joint necessary to built Wairuha Nuva (his neck and ankles), they are not mentioned in the instructions manuals like they are for Tahu, Pohatu, and Onua Nuva, the component Toa for Akamai Nuva.