"The Shrine is where Tahu will bring the Kanohi."
— The Ta-Suva polisher, Mata Nui Online Game

A Suva is a shrine dedicated to Toa. Suva play a large part in the lives of Toa, as can be seen with the one in the Great Temple and the Toa Mata's Suva shrines on Mata Nui. Their primary function is to store Kanohi; a Toa can teleport masks to and from a Suva when they are needed. Suva physically store the Kanohi, and when called upon, convert them to an energy form and transport them to the Toa's location. Other beings, such as Turaga, can also use Suva.

The use of Suva is blocked by the walls of the Great Spirit Robot. In order for Toa and Turaga to access Suva on Spherus Magna, the Suva would need to be brought onto the planet. The Toa Nuva's Suva have been moved onto Spherus Magna.[2]

Action of the Toa Suva

The Toa Suva is a large Suva shrine at the center of the Great Temple in Ga-Metru. Unlike regular Suva, it had the power to transform Matoran into Toa (given the Toa Energy from another Toa), and it also contained Toa Tools. The Toa Suva was only ever used once - shortly before the Great Cataclysm, Toa Mangai Lhikan stole six Toa Stones from it and gave them to six Matoran: Vakama, Nokama, Matau, Whenua, Onewa, and Nuju. The Matoran took the stones to the Toa Suva and, after getting acquainted, placed them into the six different slots. This caused the shrine to rise up and use the power in the stones to transform the six Matoran into the Toa Metru. The sides of the shrine then fell away, and the Toa Metru chose their Toa Tools from it. The Bordakh believed that the Toa Stones and tools had been stolen, and as such, the Toa Suva was declared off-limits to the public from then on.

On Mata Nui, seven Suva were present. The six Suva in the individual Koro were responsible for yielding all the Kanohi and Kanohi Nuva the Toa collected. They also carried the Nuva Symbols upon the transformation of the Toa Mata into Toa Nuva. When the Toa defeated the Bahrag, the Suva released a beam of energy immobilizing all Bohrok on the island. When the Bohrok-Kal were unleashed, they attacked each village and stole the Nuva Symbols from the shrines. They were returned after the Bohrok Kal's defeat by the Toa Nuva. Later, the Nuva Symbols and Kanohi were taken with the inhabitances of Mata Nui when they migrated back to Metru Nui.

Ta-Suva in Mask of Light

The Ta-Suva was a shrine dedicated to Tahu, located in Ta-Koro. His Kanohi and Kanohi Nuva were stored here, as was his Nuva Symbol. When Tahnok-Kal attacked, the Ta-Matoran tried to protect his Nuva Symbol, but failed. The symbol was later returned by the Toa Nuva. Turaga Nokama later came here with Vakama and Onewa to translate the inscriptions on the Kanohi Avohkii. The Suva was destroyed by the Rahkshi as they searched for the Mask of Light. All of Tahu's Kanohi Nuva were destroyed, with the exception of the Hau Nuva he wore, although his Nuva Symbol was not lost.

The Ga-Suva was a shrine built for and devoted to Gali built in Ga-Koro. Her Kanohi and Kanohi Nuva were stored here, and later her Toa Nuva Symbol. When the Toa Mata defeated the Bahrag, a beam shot from the Ga-Suva, immobilizing the Pahrak which were attacking at the time. At the arrival of the Bohrok-Kal, the Ga-Matoran vainly attempted to defend Gali's Nuva Symbol. The symbol was brought back afterwards by the Toa Nuva. The Suva's contents were later brought to Metru Nui, then to Spherus Magna.[2]

The Le-Suva was a shrine erected for and dedicated to Lewa, located in Le-Koro. His Kanohi and Kanohi Nuva were stored here, and later his Toa Nuva Symbol was as well. When the Bohrok-Kal arrived, the Le-Matoran endeavored to defend his Nuva Symbol, but failed in their attempt, resulting in it being stolen. The symbol was restored to the shrine by the Toa Nuva subsequently. Since then, Lewa's Nuva Symbol and Kanohi were taken from the shrine and were moved to another on Metru Nui. The shrine was later moved again to Spherus Magna.[2]

The Po-Suva was a shrine made for and which honored Pohatu, located in the village of Po-Koro. His secondary Kanohi and Kanohi Nuva were stored here, as was his Toa Nuva Symbol later. Upon the coming of the Bohrok-Kal, the Po-Matoran were unsuccessful in their attempts to protect his Nuva Symbol. The Toa Nuva returned the symbol afterwards. All content inside the Suva was later moved to Metru Nui, then to Spherus Magna.[2]

The Onu-Suva was a shrine built and tributary to Onua, located in Onu-Koro. His Kanohi and Kanohi Nuva were stored here, as well as his Toa Nuva Symbol subsequently. When the Bohrok-Kal came, they were able to steal the Nuva Symbol, despite the Onu-Matoran's efforts at defending it. The Toa Nuva brought the symbol back to the shrine later. Upon the return to Metru Nui, the Nuva Symbol and all Kanohi inside the shrine were taken and moved. The Suva was later moved to Spherus Magna.[2]

The Ko-Suva was a shrine constructed in respect for Kopaka, located in the ice village of Ko-Koro. His Kanohi and Kanohi Nuva were stored here, and later his Toa Nuva Symbol was also stored here. When Nuhvok-Kal and Kohrak-Kal invaded the village to steal the symbol, Matoro valiantly tried to stop them, but was defeated by Nuhvok-Kal. The symbol was later returned to its place in the shrine by the Toa Nuva. Afterwards, the shrine's contents were relocated to Metru Nui, and later to Spherus Magna.[2]

The Suva-Kaita was located at Kini-Nui. It was also a meeting place for the Turaga. When the Toa Mata collected all of their Kanohi, they went to the Suva-Kaita to exchange them for six Golden Kanohi. This Suva was also used as an entrance to Mangaia and the rest of the Matoran Universe. When the Toa Mata traveled down to Mangaia in an attempt to defeat Teridax, the Chronicler's Company was formed to defend this Suva against any Rahi the Makuta sent in after the Toa. This led to the Battle for Kini-Nui. Later that year, it was destroyed by the Rahkshi as they began their search for the Kanohi Avohkii. 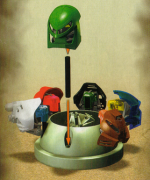 The set function of the Suva

This Suva was damaged when the Piraka enslaved the Matoran population of Voya Nui, and destroyed during the island's descent back to the Southern Continent.

The lids of the mid-2001 Toa Mata sets' canisters were each designed to resemble a Suva. All six lids were in metallic colors roughly corresponding to the color of the set with which they were packaged. Six masks could be attached around the outer edge with a head and eyepiece construction and an axle piece, while a seventh mask could be affixed to a central protrusion in the shape of a head. This lid was also included in the BIONICLE: Quest for Makuta board game, where it was used to represent the Suva-Kaita (although called "Makuta's secret temple" within the context of the game).