"The nickname for them is 'Fikou web', after what the spiders leave down below, because the tunnels crisscross and twist around each other so."
— Toa Metru Whenua, The Darkness Below

The Fikou Web is a nickname often applied to the many maintenance tunnels under the Onu-Metru Archives.

These tunnels were named after the webs the Fikou spiders leave in the tunnels, and the web-like pattern of the tunnels themselves. Due to the complexity of the tunnels, Matoran avoid the section as much as possible, spawning a number of rumors and myths of maintenance workers going missing. 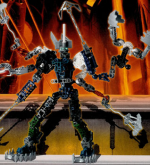 Krahka, a Rahi who lived in the Web

The intelligent Rahi Krahka eventually made her way to the Archives, and took up residence in the area.

Nuparu, searching for an empty Rahkshi body, discovered a leak coming from the Protodermis sea pouring into the Fikou Web, and rushed out of the Archives in search of help. He discovered the Toa Metru, and implored them to help fix the leak. The Toa traveled underground to solve the problem and once inside, fought two Rahkshi. While in the labyrinth, the team split up in search of the leak. Nokama was attacked by another Rahkshi, one of Insect Control and fell unconscious. After she awoke and regrouped with the four of the other five Toa, they were fooled into thinking that they were attacked by each other, resulting in a conflict between them. After the Toa's battle had ended, Krahka, who had taken Whenua hostage and assumed his form, appeared to the Toa Metru, and informed them that they had been tricked by the Rahi, and "he" then told what he knew about Krahka and her powers of Shapeshifting.

The Toa journeyed deeper into the Fikou web. As they traveled through a very dark tunnel, Krahka began kidnapping the Toa, and they disappeared one by one, until only Nokama and "Whenua" were left. Nokama finally discovered Krahka's guise as Whenua after seeing the "Toa"'s lack of concern for his friends. Krahka fled from Nokama and left her to face three Rahkshi, which she managed to defeat. She then found all the other Toa except Whenua. The team began then search for Krahka and Whenua. Nuju scouting ahead, was attacked and trapped by Krahka who then impersonated him to join the other Toa again. Vakama, however, realizing ahead of time what might have happened to their friend had prepared a trap for the creature with the others. Tricked into revealing herself, Krahka vanished to avoid capture. The Toa began to cut a passage through the Fikou Web's tunnels, hoping to attract Krahka's attention. The ploy worked, and the Rahi captured them and took them to her lair at the back of the web. There, they freed Whenua and Nuju and together they fought and defeated Krahka. The Toa then repaired the leak and returned to the surface after she escaped. During this battle, the Tahtorak was awakened by the noise and later broke through the surface, destroying some of the tunnels when escaping.

Any damage done to the tunnels during the Great Cataclysm was repaired by the use of the Staff of Artakha a thousand years later.

The Fikou Web is a way of traveling across Metru Nui. However, it is open only to authorized Matoran, usually Onu-Matoran and Ta-Matoran. When Matoran travel through the Fikou Web, they travel by cart.

The tunnels are usually narrow and twisted, often criss-crossing with each other. This lead to the origin of the nickname the Fikou Web, in addition to the number of webs that Fikou spiders leave there. At some points, hatches lead to the surface or into the Archives.

Pipes run in some tunnels, providing heat to the rest of the city using Molten Protodermis. A corridor in the maintenance tunnels leads to the Prison of the Dark Hunters, which was once guarded by Vahki Rorzakh. Another tunnel leads to a gateway to the Canyon of Unending Whispers.

Some parts of the Fikou Web contain huge doors, like those used in the sublevels of the Archives, containing storage containers. The Toa Metru also found a Vahki transport here.

Exhibits that are usually too dangerous to be kept above, like Rahkshi and in one case a Muaka, are kept at the edges of the network.

As a result of the Battle of Bara Magna, the Fikou Web, along with the rest of Metru Nui was severely damaged.