"Fero was about to spur on his mount when Skirmix began shaking its head and snapping its jaws together. The animal sensed prey."
— Narrator, Raid on Vulcanus

Skirmix is a Rock Steed ridden by the Bone Hunter Fero. 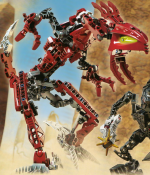 Fero, at some point in the past, defeated the Rock Steed. Beaten, Skirmix became the Bone Hunter's ally, assisting him in his pursuits.

Skirmix aided Fero in chasing down Berix in the desert of Bara Magna, but they were stopped by Gresh, Tarix, and Strakk. Fero and Skirmix retreated, and Skirmix trampled Strakk during their escape.

While carrying his master through the desert, Skirmix sensed an approaching caravan, and alerted Fero to it. Fero rode him to the location, but the caravan was gone when they arrived. Gelu, guard of the convoy, remained behind, and Fero dismounted the Rock Steed to face him. Fero was eventually beaten, and Gelu fired several Thornax at Skirmix, forcing him to back off.

Skirmix and Fero later joined the Bone Hunter band gathered for the assault on Vulcanus, and traveled to the village. They attempted to ride through the Iron Canyon in order to attack the village, but were deterred by the villagers, who had prepared traps for them. Fero rode Skirmix out of the canyon after failing to reach Vulcanus, and they traveled through the desert. The Bone Hunters eventually turned around, and traveled through the Sea of Liquid Sand to reach Vulcanus. Fero dismounted Skirmix several times in order to fight the Glatorian that were there to defend the village. The Hunters were eventually beaten, and Fero rode Skirmix out of Vulcanus.

Sometime later, Fero and Skirmix both took part in the Battle of Roxtus, where they left before it ended in defeat for the Skrall.

Like all Rock Steeds, Skirmix possesses keen senses such as acute sight and hearing, sharp claws, a venomous stinger tail, and powerful jaws. Rock Steeds' bodies are also self-cooling so long as they remain moving.[2] Skirmix is able to travel great distances without food or water.[3]

Skirmix was released with Fero in early 2009 as a 148-piece boxed set called 8990 Fero & Skirmix, exclusive to Walmart. Fero attaches to his steed's back with a red axle affixed to his own. The Fero and Skirmix set contains a rotating "life counter" piece for the BIONICLE Action Figure Game, mounted on the back of Skirmix's neck. The life points on the life counter are reduced by one if Skirmix is struck by a foe's Thornax and by two if Fero is struck.

An alternate version of the Fero & Skirmix set with box art promoting BIONICLE: The Legend Reborn was released in mid-2009. This set's contents were identical to those of the previous releases.

The Fero & Skirmix set can be combined with the Malum set to build the Sand Stalker using instructions included in the March–April 2009 issue of LEGO Brickmaster magazine.