The Temple of Peace, also known as the Ko-Koro Ruins, was a gathering of statues in the Drifts of Ko-Wahi, so-named because it contained the Crystal of Peace. 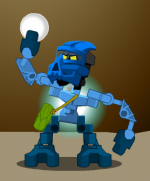 Hahli retrieving the Crystal of Peace

During the events of the Kolhii Tournament, Hahli completed the Temple's tests and retrieved the Crystal of Peace.

The Temple was later destroyed by the reawakened Bohrok swarms.

To gain access to the Temple, one was required to first gather the Charms of Peace, Destiny, and Willpower, enter a passageway in the walls of the Sanctum, and locate the statues in the stormy conditions of the Drifts. The Charms were to be placed in key slots on three of the statues with riddles alluding to that Principle, Virtue, and Kolhii Skill. These riddles were:

Once the Charms had been used properly, the fourth statue revealed a hidden entrance and within, the Crystal of Peace appeared on the dais.