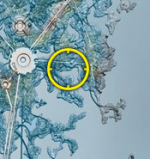 The Protodermis Falls as seen from the air

The Protodermis Falls were Matoran-made structures found in the Ga-Metru district of Metru Nui.

The Falls, known for their beauty and serenity, were a popular tourist attraction, and the starting point for the Ga-Matoran Macku's Metru Nui Line Boat Tours. Bathing in the water was very relaxing, but was ill-advised due to the threat of marine Rahi, and Vahki Bordakh restricted this activity.[1]

The Falls were damaged in the Great Cataclysm, but were repaired 1,000 years later by the usage of the Staff of Artakha. The Falls were later ruined along with the rest of Metru Nui when a fragment of Aqua Magna struck the city. Later, the Protodermis Falls, along with all other locations in the Matoran Universe, were dismantled.[2][3]