Set 8546 PowerPack is a special edition set released in 2001. The Power Pack and its contents were promoted on BIONICLEmusic.com, a website run jointly by LEGO and Universal Music, the recording company for the music included. 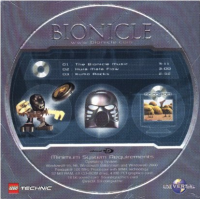 The back of the box

The Power Pack consists of four items, including a total of nine LEGO pieces:

CD Art for the Power Pack

The CD starts with an animation of Mata Nui and zooming in to Po-Koro. The menu for the CD was an image of Po-Koro, featuring Toa Mata Pohatu, a few Po-Matoran (including Hafu), Turaga Onewa, and a pile of Golden Kanohi Masks. All three characters would occasionally move, similar to the Desktop Toys. By clicking on the characters, one would receive a bio of that character. By clicking different parts of the character, the viewer would receive different information.

The viewer could also click a wall on the right with masks on it. It would lead the viewer on a wall with all the six Kanohi. Clicking them would make information appear about them on the bottom of the screen.

By clicking the image of Mata Nui on a hut wall between Onewa and Pohatu, an animation of the legend of the Toa Mata arriving would begin. This was not the Legend of Mata Nui animation however, but rather an animation with images and text explaining the legend.

Clicking the Golden Mask pile gave the viewer a quiz of 4 questions. It stated that if the viewer got them all right, he/she would get access to a competition where the winner would get a solid golden Kanohi Hau.

By clicking the box in the sand near Hafu an advertisement of the BIONICLE: Quest for the Toa video game would play.

The CD also contained all six of the Toa Mata Promo Animations, as well as the rare Turaga Vakama animation, which were playable when the CD was placed into a computer.

Hafu's arms can be pulled back and released, making them shoot back forward. His right hand is capable of holding a Bamboo Disk, and doing this while Hafu is holding the disk causes him to throw it. The disk could also be stored on his back.

The set features a chrome silver Kanohi Hau, meant to represent the Kanohi Rua. Hafu wears a black Noble Kanohi Ruru. Also included is a Bamboo Disk featuring Tahu's Kanohi Hau and the mask's name. This disk is identical to the one included in 1391 Jala.

8546 PowerPack scored a total of 50 on Brick Insights, indicating negative reviews, though with only two recorded reviewers.