Interactive Demo CD is semi-canon.
The subject of this article has aspects that are not part of the canon BIONICLE storyline. As such some, but not all, information on this page is non-canon. Non-canon information is presented for completeness and should not be removed. 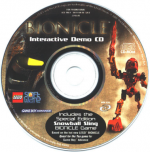 Interactive Demo CD, also called BIONICLE Gold, was released in 2001 as part of various promotions, including a 2001 Toys "R" Us promotion where participants engaged in one-on-one battles using the remote-control Manas sets. All entrants received a copy of the demo disk.

Upon starting the CD, one is presented with an option of an English or French language setting. Once selected, the main menu can be seen. It features three sections: "Products," "Digital Gear," and "Universe."

When first opened, the Products section brings up a window containing Huai Snowball Sling, a minigame from BIONICLE: Quest for the Toa. Once closed, the viewer is presented with several options. Clicking the image with Toa Mata Pohatu and Turaga Onewa opens a gallery containing pictures of Tarakava, Nui-Rama, Nui-Jaga, Manas, Muaka, Kane-Ra, Vakama, Nuju, Whenua, Matau, Onewa, Nokama, Tahu, Kopaka, Onua, Lewa, Pohatu, and Gali. If the picture of Gali and Pohatu is selected directions for how to construct a Black Fikou Spider using Pohatu and Onua sets are shown. If the box art of Quest for the Toa is selected, the window with Huai Snowball Sling again appears. Selecting the box art for BIONICLE: The Legend of Mata Nui shows a gallery with images of the six Toa Mata, Mata Nui and Makuta stones, a group of Turaga standing atop the large bust of a Toa Mata head located at Amaja-Nui, the island of Mata Nui, a Toa Canister, and Various Kanohi masks. Selecting the final icon, an Infected, Great, Kanohi Hau, shows the BIONICLE: The Legend of Mata Nui Promo Animation.

The Digital Gear section features screen savers, wallpapers of the Toa Mata, and music. Upon selecting any of the screen savers, a box confirming that the screen saver was installed is shown, while selecting a wallpaper shows a yes/no confirmation window. Shown in the screen savers are high-quality renders of the Toa Mata, as they are seen in the Toa Mata Promo Animations, Matoran writing, as well as the Three Virtues logo. The wallpapers are large version of the smaller thumbnail-sized images shown under the Wallpaper heading. Choosing any of the first nine musical notes under the Music heading causes a sound clip to play, while pressing the tenth and final icon stops any music playing at that point.

The Universe link reveals an image of the Toa Mata standing in a circle around the Suva-Kaita. Arrows on the right and left sides of the dais rotate the Toa in that direction, and the Toa facing the viewer will stand at attention while the others have their heads bent down. The four pillars around it are each inscribed with a link to content concerning the Toa at attention: a paint palette which links to BIONICLE concept art, a video camera which links to a promotional video, a booklet which links to BIONICLE 1: The Coming of the Toa, and the Virtues Symbol which links to a printable Matoran Alphabet decoder.