"We are Toa! We are the elements!"
— Gali, The Dark Portal

The Toa were a team of six destined heroes who wore elemental Masks of Power that allowed them to control their respective elements. 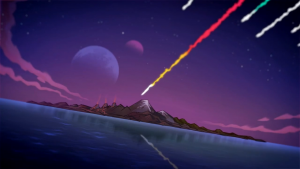 The Toa rain down on Okoto

Following the apperance of all six Elemental Creatures, Ekimu and the Protectors travelled to the sing the Temple of Time to use the Mask of Time. Using the mask, Ekimu saw visions and learned of the Toa and their arrival. When later conveying these visions to the protectors, he named each after the the stars.[1]

The arrival of the Toa would also be foretold in the Prophecy of Heroes, given to the Protectors by the lifeless body of Ekimu following the Battle of the Mask Makers.

Gathering in the Temple of Time and reciting the prophecy, the Protectors summoned the Toa with the use of the Mask of Time. The Toa then descended from the skies onto Okoto. Once the Toa landed, they had no recollection of who they were, so the Protectors informed the heroes of their names and mission.

Following the Protector's guidance, the Toa traveled for weeks through the wilds of Okoto to retrieve their Golden Masks of Power so they could fight the Skull Spiders threatening the land.

Immediately following their victory, the Toa received a vision from Ekimu, which told them to proceed into the City of the Mask Makers. Not long after entering, the Toa encountered several Skull Warriors, infantry of a larger Skull Army that sought to block their passage. During the ensuing fight, Onua, Master of Earth, defeated the Skull Warriors with a very large earthquake attack, which also accidentally knocked out their escape passage. Forced to venture further into the city, the Toa briefly split up when Toa Lewa insisted on exploring a part of the city that Kopaka saw as a distraction. While Lewa was examining an area outside of the Arena in the city, Skull Slicer stole Lewa's Golden Mask, prompting the Toa to come to Lewa's aid. During the fight, Onua destroyed the Arena, burying the Toa underneath tons of rubble. Trapped, the Toa recalled their arrival on the island and their experiences on their quest, and lamented at the prospect of being trapped under the rubble forever. Lewa however, made a comment about sensing some air nearby, and upon hearing this, Onua used his elemental powers in order to throw the rubble away, which allowed the Toa to begin moving again.

Emerging into a graveyard, the Toa eventually located the mausoleum where Ekimu's body was entombed. Two Skull Scorpios were encountered, defeating most of the Toa, though they were eventually crushed under a large rock dropped by Lewa. When the Toa entered Ekimu's tomb, they received another vision, showing them how to revive Ekimu with their elemental powers. After being resurrected, Ekimu scolded the Toa for having been late, and directed them to go to his forge, where the leader of the Skull Army - Kulta, the Skull Grinder - would be attempting to destroy the Mask of Creation. The Toa and Ekimu went to the forge, where Kulta challenged them. To make matters worse, he began to wear the Mask of Creation himself. This gave him so much power that he was able to fell all six Toa in a single blow, and in fact, the attack shattered their Golden Masks of Power. Even though they were powerless however, the Toa were able to buy Ekimu enough time to recreate his Hammer of Power by repeatedly throwing themselves at Kulta. Having remade his hammer, Ekimu immediately used it to bash the mask of creation off Kulta's face, thus retrieving it from him.

Following this victory, Ekimu reforged the Toa's Golden Masks of Power and awoke them, deeming them worthy of being heroes. The group soon set about repairing the City of the Mask Makers in preparation for the arrival of Okotans from around the island.

After learning of the abduction of two young Stone Okotans, the Toa and Ekimu set out to rescue them and came across the city of the Skull Raiders, ancient enemies of Ekimu and servants of Makuta. Lewa was captured along with the youngsters, but Gali challenged Raider commander Axato to a duel that enabled the other Toa to escape. They were then forced to deal with the entire group of Raiders and the arriving Kulta, who had escaped his prison beneath the Mask Maker's forge, but managed to collapse the city and trap their enemies beneath the rubble.

Ekimu forged new weapons and masks for the Toa, which they put to use against rogue Skull Warriors. He then instructed them to seek out the Elemental Creatures, so that they could gain greater power and retrieve the Mask of Control. The Toa found their Elemental Creatures and gained their trust by bowing to them. The Elemental Creatures guided each Toa to a shrine in their region, where they obtained the Golden Masks of Unity, allowing them to unite with their respective creatures. Along the way, Lewa encountered Umarak, a figure hunting the Elemental Creatures for his own ends.

The Toa returned to the city and reported to Ekimu. Uniting with the Elemental Creatures gave them a vision of the Labyrinth of Control, where the creatures had hidden the Mask of Control. Ekimu told them to travel there, and to beware of Umarak. Along the way, Umarak attacked the Toa, but withdrew after only a few minutes. The creatures guided the Toa to the shores of Okoto, where they could see the Labyrinth across the ocean. The Toa engaged in a race to the Labyrinth, using their increased power. They were surprised to learn that Pohatu had not united with his creature, Ketar, and Pohatu told them he would unite only when necessary.

Tahu opened the Labyrinth of Control, and the Elemental Creatures guided them through the shifting maze. The Mask of Control was hidden inside a chamber that required all six Toa, united with their Elemental Creatures, to open. Five of the Toa opened their pathways and descended. However, Umarak attacked Pohatu, united with Ketar to unlock the path, and stole the Mask of Control. Pohatu gave chase, with the other Toa following behind. At the edge of the Labyrinth, Umarak threw Ketar off a cliff, forcing Pohatu to choose between saving Ketar or reclaiming the mask. Pohatu chose to save Ketar, and Umarak escaped. The other Toa arrived, and Pohatu expressed his regret for his poor decisions, but they assured him they would defeat Umarak together.

The Toa and Creatures had not long to rest, as the Shadow Horde soon attacked the City of the Mask Makers after laying waste to a village in the Jungle Region. A confrontation ensued between the heroes and the Elemental Beasts, but Ekimu - now imbued with the power of Light - soon called on the heroes to join him in stopping Makuta's return while the creatures continued to defend the city. They trailed Umarak to the Region of Stone and then to the peak of a dark mountain he had created as the sight of Makuta's escape, and engaged him in a grueling battle. Gali, drawn into the Shadow Realm during the battle, soon learned the true destiny of the Toa, and led her brothers in combining their Elemental Powers to stop Makuta's escape. They succeeded in banishing him yet again, expending all their power in the process and returning themselves to the Elemental Stars from which they had traveled to reach the island.

The six Toa are all bound by a single purpose, but have clashed internally over the best way of achieving their goals. Upon meeting his comrades for the first time, Tahu declared himself leader of the Toa, an idea that was met with skepticism and disdain from the others. Kopaka also attempted to take a leadership role, causing the two to butt heads while the Toa attempted to complete their mission. However, when they finally all managed to work together, the Toa were able to defeat powerful enemies they could not take down alone. Their lack of unity was noticed by Ekimu, who coached them in ways to embrace their teamwork.

When they first arrived on the island of Okoto, the Toa were each known as a Master of their element. After receiving their new quest to find the Great Elemental Creatures, the Toa became Uniters of their elements.

"It was the power of this prophecy that made six elemental heroes rain down upon Okoto. Who they really were remained a mystery, but it was their destiny to defeat evil and save the island."
— Narrator, Prophecy of Heroes

"Never have I seen such bravery. You are all worthy. Rise!"
— Ekimu, Island of Lost Masks

"Their legend was carved into the walls of our temples, and their names were kept alive in our rituals. These were the Toa."
— Narmoto, Prologue: The Legend Begins

"We are Toa."
"Uniters of the elements!"
— Onua and Pohatu, The Dark Portal