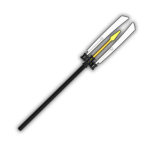 The Harpoon and Shark Fins

The Elemental Trident was Gali's weapon, which holds the power to command the element of Water, creating tidal waves and heavy rain. It could be split into the Power Harpoon, Gali's preferred weapon for fighting on the ground, or the Shark Fins, which grant her unparalleled speed underwater.

The Elemental Trident appears in 70786 Gali - Master of Water. It is held in the set's right hand and uses 22 of the set's 87 pieces. In adrenaline mode, twelve of those pieces become the Shark Fins and the remaining ten become the Power Harpoon. Two bright red cross axles on the Shark Fins can be used to join them together into an optional single tail fin.