The Region of Stone is a dry, barren realm in the northwest corner of Okoto.

The Region of Stone is home to the Okotans of the Stone Tribe, who are led by the Protector of Stone, a title passed down through the generations. The region was named for Ketar, the embodiment of Stone among the Elemental Creatures.

Thousands of years later, Okoto was menaced by Skull Spiders seeking the legendary Masks of Power. Nilkuu, the current Protector of Stone, along with the other Protectors, traveled to the Temple of Time, where they used the Mask of Time and the Prophecy of Heroes to summon six Toa.

Pohatu, the Master of Stone, crashed into the Region of Stone after being summoned. He was met by Nilkuu, and the two traveled for weeks through the region to the mask's shrine. There, Pohatu claimed the Golden Mask of Stone and used its increased elemental power to save Nilkuu from a horde of Skull Spiders. He then departed for the City of the Mask Makers, which the villagers of the Stone Region would later travel to along with the other Islanders after it was reclaimed.

Pohatu returned to the Region of Stone in search of Ketar and his Golden Mask of Unity. Later, the Toa, Ekimu, and Agil came to the region in pursuit of Umarak, confronting him at the Black Crater.

The Region of Stone is a hot, arid wasteland, covered in shifting sands. The region is plagued by violent sandstorms.

The Black Crater is the site of Ekimu's battle with Makuta, and the former site of Capital City. Also known as the Great Crater, the ruin was left when the Mask of Ultimate Power exploded from the sheer force of the energies it contained, which opened a portal to the Shadow Realm that drew in Makuta, Capital City, and possibly other inhabitants. Umarak later returned to this site in order to free Makuta, using his powers to raise a shadowy mountain from the depths of the crater.

The Capital City of Okoto was once located in the Region of Stone, and included a museum that held a collection of several ancient Masks of Power. However, it was destroyed as a result of Makuta's Betrayal. 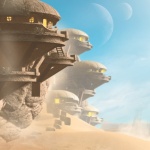 Villages in the Region of Stone are home to the tough Okotans of the Stone Tribe.

The resting place of the Golden Mask of Stone was located in a canyon deep in the desert. The shrine is decorated with the statues of ancient scorpion-armored warriors.

Temple of the Stone Creature

A structure guarded by Ketar, Creature of Stone, which the ancient Protector Kerato visited in order to obtain a crystal needed to empower Pohatu's Golden Mask. Pohatu's Golden Mask of Unity was also kept here, and retrieved after Pohatu realized that he had to accept Ketar as an equal.