"Long ago the Skull Slicer was an unbeatable arena champion, loved by the inhabitants of Okoto... but now his past is lost to him."
— Centerfold, July-August 2015 LEGO Club Magazine

Skull Slicer was a four armed Skull Creature. A sporting champion before his death, he was revived and became a lieutenant of Kulta.[1]

Skull Slicer was once a famed Hammer Flush champion on Okoto and loved by many Okotans. He later died and his body was reanimated under the control of the Lord of Skull Spiders. He then began guarding the Arena in the City of the Mask Makers, where he once competed in.[2]

After the Toa passed through the City Gate into the City, Skull Slicer stalked Lewa until Lewa stopped to examine a sign at the Arena. Skull Slicer threw his Mask Grabber through the sign, capturing Lewa's Golden Mask of Jungle. Lewa collapsed, and Skull Slicer made his way into the Arena, although the other Toa noticed him. Slicer led the other Toa into the Arena, where he put on Lewa's stolen mask and began draining it of energy. He then began hopping around on the raised pillars in the Arena, forcing the Toa to learn the rules of the game from the weakened Lewa.

Skull Slicer was eventually pinned by Pohatu's Stormerangs and disarmed, but used his extra arms to trap Tahu and use him as a shield. Kopaka managed to punch Skull Slicer in the face, freeing Tahu and retrieving Lewa's mask. Onua then won the game by smashing a lever, causing the floor to drop out from underneath Skull Slicer and destroying the entire Arena. It is unknown if he survived the fall. 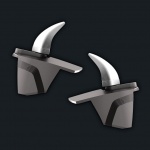 Skull Slicer had the ability to extract elemental power from Masks of Power by wearing them.

Skull Slicer wore a Skull Spider Mask, which he discarded in order to wear the Golden Mask of Jungle.

Skull Slicer carried three Razor Sharp Hook Blades, capable of cutting through solid stone. He also carried a Mask Grabber to obtain masks. Even with all four arms disarmed, he scratched at his opponents with his Bone Spikes.[1]