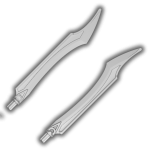 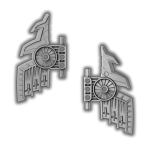 The Battle Axes were Lewa's weapons, which are heavy cleavers that will cut through dense jungle foliage. They can be split into a pair of Swords, fast weapons designed for close quarters combat, and the X-Glider, which enables Lewa to swoop down from the Jungle canopy to surprise his enemies.

The Battle Axes are included in 70784 Lewa - Master of Jungle. Each Battle Axe uses six of the set's 84 pieces. To switch the set from battle mode to adrenalin mode, the five-piece upper half of each axe blade snaps to a connector on the corresponding lower arm to become the X-Glider, while the Silver Metallic handles become his Swords.

The axe blades are also used as the X-Glider when "powering up" the set with parts from 70778 Protector of Jungle. In that mode, the Swords are set aside and Lewa carries the Air Elemental Flame Bow in their place.