"Beware of their stinger tails."
— Onua, Island of Lost Masks

Skull Scorpios are bestial Skull Creature scouts under the leadership of Kulta.

The Skull Scorpios were created by Kulta's dark power[1] and served him and the Lord of Skull Spiders.[2]

Two Skull Scorpios attacked the Toa after they emerged into the Graveyard in the City of the Mask Makers, stealing Pohatu's Golden Mask of Stone and defeating Gali, Tahu, and Onua. The Skull Scorpios pursued Lewa to the entrance to Ekimu's tomb, but Lewa sliced a stone monument on top of the tomb in half, crushing each Skull Scorpio with one of the pieces.

After Kulta's defeat, the Toa worked together to expel the Skull Scorpios from the city.[2] 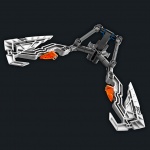 The stinger of a Skull Scorpio

Skull Scorpios have the ability to extract elemental power from Masks of Power by wearing them.

Skull Scorpios often travel in small packs. They are sneaky and patient, willing to wait for days before launching the perfect strike.[1]

70794 Skull Scorpio was released as one of the sets in the August 2015 product wave.