"Defilak was right — if they had not discovered the products of the fields of air within moments after sinking, they would have died, or mutated, or maybe something worse."
— Narrator, City of the Lost

The Fields of Air were an area of prolific Airweed growth on the outskirts of the Mahri Nui landmass. 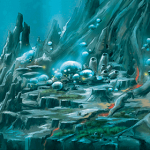 The Fields of Air were a natural part of the underwater terrain of Aqua Magna.

When Mahri Nui tumbled into the sea, it crashed onto the Fields, which resulted in a fusion of the landmasses. The Fields survived the impact but were disturbed, causing the plants to release their Air bubbles. These bubbles enabled the Matoran to survive the plunge. They later tamed Rahi called Hydruka to harvest the bubbles to use as personal modes of transport underwater and to maintain the large bubbles around the buildings of the Mahri Nui Fortress.[1]

When the Kanohi Ignika traveled to Mahri Nui, Barraki Carapar sent his Keras Crabs to occupy the Fields during the Barraki's search for the Mask of Life. During this time, the Matoran Gar and Idris attempted to use the Airweed to strengthen their fading personal air bubbles but were prevented from doing so by the Keras. Later, however, these Rahi were soon driven out by the Toa Mahri who were then accosted by the Barraki who took them from the Fields to their caves.

The Fields of Air were destroyed when Voya Nui returned to its position on the Southern Continent and destroyed the Mahri Nui landmass.