"This is a dark time for our island. Many have lost their masks to the Skull Spiders and fallen under the control of the Lord of Skull Spiders."
— Nilkuu, Island of Lost Masks

Skull Spiders are arachnid Skull Creatures that dwell on Okoto.

Long after the powerful Mask of Creation, Mask of Control, and Mask of Ultimate Power were lost to the wilderness, the Skull Spiders began appearing in force on Okoto. Commanded by the Lord of Skull Spiders, sponsored by the dark spirit of Makuta, they attacked several of the villages and menaced the Okotans. Their goal was uncovering Ekimu's Golden Masks of Power for Makuta, the locations of which were only known by the villages' Protectors.

Many Skull Spiders followed the Protectors as they led the Toa through Okoto's wilderness for weeks to find the Golden Masks of Power. Once the Toa neared claiming their Golden Masks of Power, the Skull Spiders attacked, though they were defeated by the Toa's increased elemental powers. This forced their Lord to challenge the Toa himself, only to be defeated by their combined efforts.

Makuta sent a Skull Spider to free Kulta from his cell and retrieve his mask.[2]

Several joining a group of Skull Warriors in attacking the reclaimed City of the Mask Makers, and later at least one Skull Spider was captured by Shadow Traps.

Skull Spiders also have a limited form of communication, which enables them to follow commands and have basic thoughts and conversation with their fellow spiders.[4] 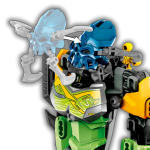