"Skull Basher is a towering brute of pure evil. Skull Grinder’s dark power courses forcefully through his bones making him the strongest of the Skull Army’s lieutenants."
— BIONICLE.com

Skull Basher is a minotaur-like Skull Creature who was a former lieutenant in the Skull Army.

Skull Basher was one of the Skull Raiders, a band of pirates led by Kulta who were defeated by the Protectors and Mask Makers centuries ago. After their defeat, they were approached by Makuta, who offered them an alliance in exchange for their services.[2]

Skull Basher accompanied Kulta to the City of the Mask Makers and was placed as a sentry at the entrance to the Mask Maker's forge. When the six Toa and Ekimu approached the gate, they were challenged by Basher, who knocked a quarreling Kopaka and Tahu down the stairs. Onua, the Master of Earth, attempted to charge at Basher, but was easily defeated by the Skull Creature. Basher then took Onua's Golden Mask of Earth, and began draining its energy.

At Ekimu's instruction, the remaining five Toa combined their elemental powers, and charged full force at Basher, knocking him out and dropping Onua's Golden Mask, which was recovered by the Toa.

The Protectors eventually came across his inert body as they found their way into the forge. As a precaution, Ekimu had separated him from his mask, and he and Kulta were soon imprisoned in separate prison cells within the city.[3] 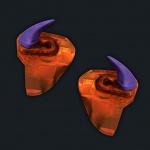 Skull Basher has the ability to extract elemental power from Masks of Power by wearing them. He is the strongest of Kulta's lieutenants.[1] He also strongly resembles a skeletal Minotaur.

Skull Basher wore a Bull Skull Mask, which he discarded in order to wear the Golden Mask of Earth.

Skull Basher wielded two Hook Axes, with which he could bash opponents and snatch away masks. His shoulders feature Doom Spikes that can pierce armor.[1]