"What they lack in strength, they more than make up for through numbers. Even when knocked down, these fearless fighters will keep coming back to freeze the bones of all but the bravest heroes."
— BIONICLE.com

The Skull Warriors were skeletons animated by Kulta to serve as soldiers in the Skull Army. After his defeat, they went rogue.

The army of Skull Warriors were created by Kulta's dark powers.[1]

Upon entering the City of the Mask Makers, Tahu accidentally set off a trap that sealed the Toa in the city. Skull Warriors then emerged from the ground to attack the Toa, while another group of Warriors shot at them from above. Onua used his Earthquake Hammer to defeat the ones that came from the ground, but also collapsed the bridge that they took in, leaving them open for the Skull Warriors up above to keep shooting. Lewa returned from scouting and knocked the Skull Warriors from the wall onto the ground, where they were easily dispatched by the Toa.[2]

The Protectors and Harvali found the remains of these Skull Warriors after entering the city themselves, and were forced to engage another group with help from a giant serpent. They successfully defeated them before moving on to meet Ekimu and the Toa.[3]

After the Okotans had reclaimed the city, several remaining Skull Warriors attacked. They were initially dismissed, until a force of Skull Spiders teamed up with them. Using their new masks and weapons, the Toa swiftly defeated the villains before starting their quest to find the Elemental Creatures. 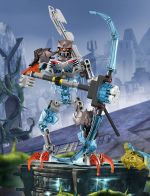 The Skull Warriors had the ability to extract elemental power from Masks of Power by wearing them. They were individually weak, but could be dangerous in numbers.[1]

"With their leader gone, they are no real threat, unless..."
— Ekimu Quest for Unity

70791 Skull Warrior was released as one of the sets in the August 2015 product wave. It came with a "drained" version of Kopaka's Golden Mask of Ice that had no role in the storyline. The Skull Warrior could be combined with the Skull Basher and Skull Slicer sets to create a larger model.