"Before them stood dozens of wolves, their bodies a weird mixture of muscle and fur and dull metal. Their eyes were gleaming points of savage light in the darkness. Tarduk could smell their musky odor, mixed with the scent of cold iron."
— Narrator, Riddle of the Great Beings

The Iron Wolf is a species of biomechanical predatory creatures on Spherus Magna engineered by the Great Beings. 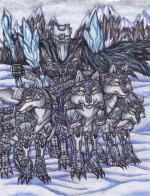 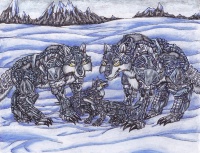 The Great Beings created the Iron Wolves by modifying existing creatures[1][2] before the Core War.[3] The wolves were forced to assist in the war raging on Spherus Magna, and the warrior Surel trained a pack of wolves and led them into battle.[4]

Surel's wolves arrived on Bara Magna and were stranded there when Spherus Magna shattered into three parts. They eventually migrated to the White Quartz Mountains with Surel, who had been badly injured during the war. The wolves protected and brought food to their master.[4]

A small hunting pack of the wolves encountered a search expedition led by Tarduk. The hunting party trailed the team for a while, prompting the Agori to attempt escape maneuvers. Though the wolves were not fooled, they later hung back, luring the party into their den.[5] There, the Agori were confronted by Surel, who explained the history of the wolves. The Element Lords of Ice and Fire soon arrived and fought each other, and the wolves retreated.[4] 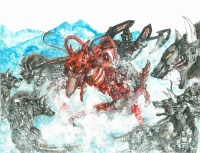 Excellent hunters and trackers, the wolves were also trained to fight so they could help in the Core War on Spherus Magna.[4]