The Okotans, also known as islanders, are the primary inhabitants of Okoto.

A long time ago, the Mask Makers Ekimu and Makuta created Masks of Power for the Okotans, who used them to carve out their own livable niche in the island. Ekimu's masks grew to be favored by the Okotans for his good craftsmanship, which ignited feelings of resentment in his brother, leading to his betrayal.[1]

After the battle between Ekimu and Makuta, Ekimu was found in an eternal slumber by the era's Protectors, the leaders of the villagers, who heard the Prophecy of Heroes whispered from his body.[2]

Thousands of years later, the Skull Spiders began to invade the dwellings of the Okotans. The Protectors traveled to the Temple of Time, with Protector Nilkuu getting aid from the Jungle Tribe villager Bingzak, and recited the Prophecy, summoning the elemental heroes known as the Toa.[2] When the Toa landed on Okoto, the Okotans quickly came to their aid. Narmoto led his village to Tahu's landing site and told Tahu of his destiny. Soon after, several Skull Spiders began to attack, but Tahu effortlessly defeated them, awing the villagers. The Protectors then accompanied each Toa to find their Golden Masks of Power.[3] After the Toa and Protectors succeeded in defeating the Skull Army and awakening Ekimu, the Okotans were called to the City of the Mask Makers in order to make it their new home and continue to guard against evil.[4]

Some Okotans remained in their home regions, such as Melea and her two nephews, who remained in the Region of Stone. Melea's nephews were kidnapped by a hawk in the service of the Skull Raiders, but the Toa and Ekimu freed them.[5]

In the City of the Mask Makers, Narmoto gathered several Okotans in order to share the tale of the heroic exploits of the Toa, after which they saw the heroes emerge from Ekimu's forge with new masks and weapons.[6] Afterwards, the villagers were terrorized by an attacking group of Skull Spiders and Skull Warriors, but the Toa swiftly defeated them.[7]

When the Elemental Beasts attacked the city, several Okotans took up arms against them.[8] After the Toa defeated Makuta, Izotor told their story to several gathered Okotans.[9]

The Okotans are divided into six tribes which inhabit the six regions on Okoto. They hold the Temple of Time as their most sacred place.

There are children among the Okotans, and the leadership of their villages is inherited by each new generation.

Okotan civilians wear solid-colored masks that are similar in shape to those of their leaders, the Protectors. The Protectors' masks are blended with a translucent color and have power over the Elements. The Protectors are also the only Okotans shown to carry weapons with elemental powers, while other Okotans carry ordinary weapons such as bows, axes, swords, and shields.[8] 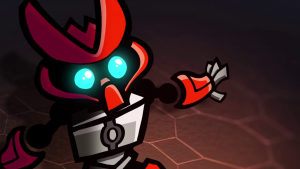 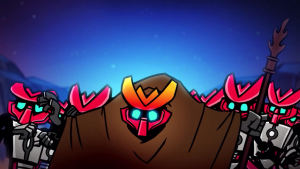 The six Protectors were released in January 2015 as small sets. Each set includes a Mask of Power and a Skull Spider. The Protector sets can each be combined with the Toa of their respective element to create a larger model.