"But legend tells of the Golden Masks, sources of even greater power, which were scattered over the island and now lie hidden. The Toa must find them if they are to save the island!"
— Narrator, The Journey Begins 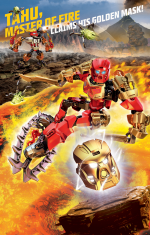 When Ekimu, the Mask Maker used the Mask of Time to look into the future of Okoto, he saw an impending threat that would require the use of six incredibly powerful masks, and crafted the Golden Masks of Power. To accomplish this task, he had the Protectors of that time gather Elemental Crystals from the Elemental Creatures.

The threat Ekimu foresaw came to pass as Makuta's Betrayal, and the resulting fight between Ekimu and Makuta caused a shockwave to scatter the Golden Masks across the island. The Protectors eventually recovered these masks, and hid one in a shrine in every region.

After the Toa were summoned to the island by the Protectors, they were informed of the rising Skull Spiders threat, and that they were to seek the Golden Masks of Power in order to better combat their enemies. The six Protectors individually guided the Toa to their respective Golden Masks, fending off the Skull Spiders along the way.

Once each Toa had claimed their Golden Mask from a shrine in the region, they received a vision of the City of the Mask Makers, and a directive to travel there and awaken Ekimu, the Mask Maker. There, the Toa encountered the Lord of Skull Spiders, which they defeated with their increased elemental powers. The Toa received another vision from Ekimu, urging them to enter the city, and did so.

The Golden Masks of Power later were replaced by the Masks of Unity.

In Power of the Golden Masks, Tahu used his increased Fire powers to dispatch a horde of Skull Spiders, which Narmoto was unable to do with his Elemental Fire Blaster.

Each Toa set of 2015 came with two masks, their standard Mask of Power and a Golden Mask of Power, which is also used in their respective Power-up models.

In the summer, Pohatu's, Kopaka's, Lewa's and Onua's masks were respectively released in sets Skull Scorpio, Skull Warrior, Skull Slicer, and Skull Basher. These were in power drained forms, being half gold and half a translucent color matching their respective Toa's colors.