2010 was the tenth and final year of first-generation BIONICLE sets. 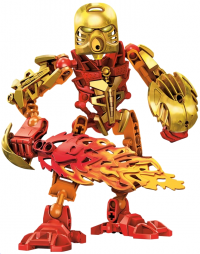 Tahu with the completed Golden Armor

Late in 2009, it was revealed that BIONICLE had been cancelled, ending the line.[1] However, a final series of six sets commemorating the entirety of the line was announced. Each set resembled a previously released character or set, and came packaged in canisters, though the piece count and style were closer to the small sets of 2008 and 2009.

The line was succeeded by Hero Factory, though BIONICLE would be revived for a second generation in 2015.

Every set came with a specific piece of the Golden Armor, which could be attached to the Tahu set to replace his armor, weapons, and mask, creating the "Golden BIONICLE".