This article is about Lewa Nuva's weapon. You may be looking for Toa Lesovikk's Toa Tool.

Lewa creating a tornado with the Air Saber 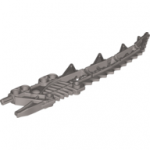 The Air Saber in set form

The Air Saber[1] was the form that Toa Lewa Nuva's adaptive Toa Tool took while in Karda Nui. Crafted from Protosteel, Lewa used it to channel his Elemental Air powers, as well as for melee combat.

In Realm of Fear, Lewa used the Air Saber to create a tornado, throwing the Makuta he was opposing off-balance.

The Air Saber was released in the 2008 Phantoka Toa Nuva Lewa set.