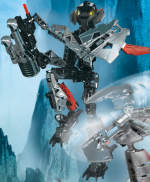 Onua Nuva wearing the Shield on his left shoulder

The Multi-Resistant Shield[2] was an adaptation to one of Toa Nuva Onua's Protosteel Toa Tools. The shield was usually attached to his left forearm, but could also be unclipped and used in alternative ways.[1] The adaptive weapon was given to Onua along with a set of Adaptive Armor, and could be used to channel his Elemental Powers.

The Multi-Resistant Shield was released in summer 2008 with the Onua Nuva Mistika set.