"But reaching your goal does not mean the end of danger—far from it."
— Narmoto to Tahu, Quest for the Golden Masks

Narmoto, the Protector of Fire, is one of six Protectors, guarding the villages of Fire on Okoto.

Narmoto inherited the position from his father of defending Okoto's Region of Fire.[1] He was also told of the Prophecy of Heroes, which his ancestors had learned from the Mask Maker Ekimu after his battle with Makuta, to be recited in times of peril. 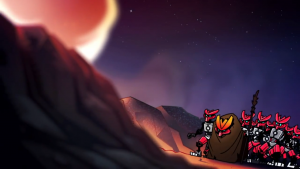 The Protector of Fire and his villagers witness the arrival of Tahu.

When Skull Spiders began to attack Narmoto's village, he and the other Protectors went to the Temple of Time to recite the ancient Prophecy of Heroes. Not long after, the six Toa fell from the sky and landed on Okoto. There was a loud crash in the Region of Fire, and Narmoto led his people to its source, where he met Tahu. Narmoto told Tahu about his destiny, but Tahu insisted that he knew nothing about defeating evil. During their conversation, Skull Spiders began to attack. Tahu effortlessly defeated them, amazing the crowd. Narmoto then told Tahu to follow him.

During the journey, Narmoto discovered that Tahu, having learned of the other Toa, was determined that he would become their leader. Narmoto attempted to dissuade him of this notion, reminding him that the legends spoke of the Toa as a force guided by unity, not by any one leader. On approaching a village on their way to the Shrine of the Golden Mask of Fire, the pair discovered it to be crawling with Skull Spiders. Despite Narmoto's warnings, Tahu charged in recklessly, and was nearly knocked into the lava by the Skull Spiders. Fortunately, Narmoto managed to save him, and cautioned him that his battles with the Skull Spiders had revealed him to the Lord of Skull Spiders. Narmoto advised Tahu to heed the Protector's greater knowledge, something Tahu agreed to, though he retained his illusions of leading the Toa to Narmoto's chagrin.

However, Narmoto would later join his fellow Protectors in gathering at the city in order to follow the Toa in and aid them if it should become necessary. Using an alternate route, they entered the city and wound up facing the Lord of Skull Spiders, whose lair they brought down atop him and many of his spider minions. They then penetrated the city itself, discovering evidence of the battles between the Toa and the Skull Army. They eventually made their way to the Mask Makers' forge, where they met Ekimu himself and were honored by him. Narmoto and Tahu worked together to light an ancient firework as part of the celebration of their victory, and soon began preparing the city for the arrival of villagers from across the island who would repopulate it.

After entering the city, during the night, Narmoto gathered with some children around a camp fire to tell them the history of Okoto and the plight of the Toa saving Okoto and awakening Ekimu. They then watched as the Toa emerged with new masks and powers to continue their task of protecting the island. The next day, after instructing the Toa to seek out the Mask of Control and the Elemental Creatures, Ekimu bid Narmoto to assist him in the crafting of new masks.

Narmoto is wise, and has been entrusted with the historical knowledge of the Prophecy of Heroes. While he has great respect for Tahu, he is not blind to the Master of Fire's failings, and tries to help Tahu see past his egotistical desires.

Narmoto wears the Protector Mask of Fire, a sacred Elemental Mask forged by Ekimu long ago and passed down through the generations.[1]

The set can be combined with 70787 Tahu - Master of Fire to create a larger model.

"Be brave, be strong, believe in your destiny."
— Narmoto to Tahu, Quest for the Golden Masks