Set 1388 Huki was a promotional set released in September 2001 portraying Hewkii, who was then known as Huki. It specifically portrays him as he appeared after his diminishment from being inside a Matoran Sphere. 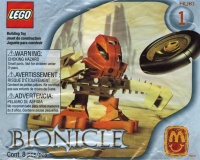 The set was also one of twelve sets given away for free in C1000 supermarkets in Holland during 2003.[1] This version of the polybag featured the same set number, but lacked the McDonald's co-branding, and the instructions advertised the Rahkshi.

An identical set, 40551 Huki, was released under a partnership between LEGO and Voira in Lithuania. This set was packaged in a box, rather than a polybag like the McDonald's release of the set.[2]

Huki's arms can be pulled back and released, making them shoot back forward. His right hand is capable of holding a Bamboo Disk, and doing this while he is holding the disk causes him to throw it. The disk could also be stored on his back.