"There are many beasts out there. Not all are dangerous, though. The Scarabax, for instance, are small insect-like creatures that roam the desert. They are actually quite nice to have around."
— Tarduk, Glatorian Arena

Scarabax Beetles are insect-like creatures that reside in the deserts of Bara Magna.

A swarm of Scarabax Beetles

Gresh encountered a group of Scarabax in a tunnel in the Black Spike Mountains, and the Scarabax attempted to eat him. However, a Sand Bat also attacked and the beetles devoured it, forgetting Gresh, and retreated into cracks in the rock of the tunnel.[1]

During their night time foraging, a group of Scarabax approached the crash site of the Kanohi Ignika. When the mask rose out of the sand and began forming a body, most of the Scarabax scattered into the deserts. One remained behind, and approached Mata Nui as he adjusted to his new body. This Scarabax, dubbed "Click" by Mata Nui, transformed into a shield when it touched the Kanohi Ignika. This shield saved Mata Nui when a Vorox attacked immediately after the transformation, and later helped during Mata Nui's battle with Tuma.

At the beginning of the Battle of Roxtus, Click gathered a large number of Scarabax Beetles to form a gigantic monstrosity that frightened Skrall and Bone Hunters alike, sending them running for cover. Not too long after, the monstrosity split apart into the many Scarabax that had formed it, and those Scarabax tunneled back underground.[2]

When Click was being pursued by the transformed Metus, he called for help from other beetles. Just before Metus was about to eat Click, he was quickly surrounded by a large swarm of Scarabax, who ignored his pleas and launched him through the air.[3]

Scarabax beetles are nocturnal and scavenge in the sand each night to feed on sand mites and other small insects. During the heat of the day, they dwell in underground tunnels.[4] The beetles react to sudden movements, allowing them to locate their prey. The natural enemy of the Scarabax beetles are the Sand Bats, which burrow through the sand and consume an entire colony of Scarabax if given the opportunity. Although the Sand Bats are larger, they cannot fight off an entire swarm of Scarabax, as a swarm was witnessed to eat an entire Sand Bat in a short amount of time.[4][1] However, they are also very intelligent and can cling together to form creatures dwarfing most Bara Magna residents.[2] Scarabax possess wings under their carapace, and can fly using them.[5] Their shell is weak until they become an adult, when it hardens significantly making it hard to trample the beetles.[citation needed: MNGtBM?]

Some Agori claim to find their company enjoyable, but others believe they are pests.[2] The beetles are considered a delicacy by the Vorox,[6] while Skrall in particular speak condescendingly of the beetles, comparing their enemies to them,[7]

20012 Click was released along with the September–October 2009 issue of LEGO Brickmaster Magazine, depicting the specific Scarabax Beetle Click. It was also available free with copies of The Legend Reborn bought from HMV in the United Kingdom. 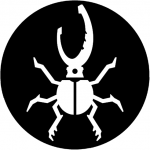 A stylized image of a Scarabax Beetle