"Lesson one. You have to know what your opponent is going to do before he does it."
"How do I do that?"
"You use your eyes and your brain. Now let's practice."
— Glatorian Ackar and Mata Nui

Challenge of Mata Nui is a young reader book released in November 2009. The book contained thirty-two pages, with full color illustrations on each page, illustrated by Dave White. 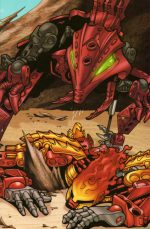 The Rock Steed standing over Ackar

On their way from Vulcanus to Tajun, Mata Nui's band stops to practice. Ackar tries to teach Mata Nui how to predict opponents' moves without them actually making any. He starts by tasking Mata Nui with figuring out which direction a Cave Shrike will turn. Mata Nui tries several times, but fails each time. Ackar tells Mata Nui that the shrike will flutter its wings in the direction it is about to turn. Despite this, Mata Nui is still unable to foretell the shrike's direction.

Ackar then takes Mata Nui to a Rock Steed to tame the creature by knowing its moves before it makes them. During the fight between Ackar and the Rock Steed, the Fire Glatorian pretends to be severely injured by the beast. Mata Nui then attempts to fight the creature, and unknowingly uses the techniques Ackar taught him to drive the creature away. Ackar then congratulates Mata Nui on learning how to predict an enemy's moves, and they continue their trip to Tesara.