"I still have the urge to 'create' running through my veins. Slapping paint on canvas helps release some of the creative monsters running through my blood but I am always on the look out for new and exciting challenges."
— Toby Dutkiewicz, coroflot.com

Toby Dutkiewicz is an Art Director at Lego Systems, INC. and has been a designer for the BIONICLE comics since BIONICLE 10: Powerless! 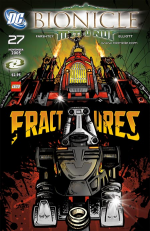 The BrickMaster edition cover of BIONICLE 27: Fractures by Toby Dutkiewicz.

Before working with The LEGO Company, Dutkiewicz was a Graphic Designer at Paradise Copies from October 1996 to May 1998, where he worked on numerous aspects of products such as posters, stickers and corporate reports. From May 1998 to December 2000, he worked as an Art Director at Paulson and Michaels Advertising which involved designing and managing print projects, developing graphic content, and assisting in the editing and producing of television advertisements.

Toby Dutkiewicz designs and manages projects involving the art direction and design of the LEGO Magazine, global print campaigns and more. Within BIONICLE specifically, he has worked on the promotional art from concept to print and packaging design such as that of the 2004 BIONICLE shoe box. He was also an artist for BIONICLE: World (illustrating Karzahni - both location and character - and Artakha), has worked on the BIONICLE comics, and did the art and coloring for the BrickMaster editions of four BIONICLE comic covers in 2005 and the COMICON edition of BIONICLE Ignition 3: Showdown in 2006.

He is also involved in a webstore called devils head, which produces and sells products such as vinyl toys, t-shirts and comic books.