"Bob is the George Lucas of LEGO."
— Henry Gilroy, Mask of Light scriptwriter

Bob Thompson is a producer, writer and editor, and the former head of the original creative team behind BIONICLE. 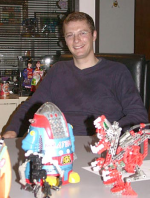 Bob Thompson with BIONICLE and other toys in a 2003 interview on BZPower. 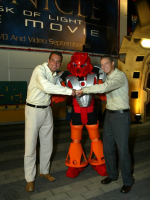 Bob Thompson is a graduate of University of Wales College in Cardiff and spent seven years with the British Broadcasting Company, in international rights acquisition for youth programs, drama, and animation. In late 1999, he was approached by the LEGO Group with an offer to develop and design stories that could be used in international toy campaigns and other media. He was part of the small group of people who were brought together to develop a new line of LEGO action figures. The figures in question, whom the team had initially dubbed "Axe, Blade, Flame, Kick, Hook and Claw", became the Toa Mata. Thompson was also responsible for story development on BIONICLE from its launch in 2001 through to the 2005 saga. He was the executive producer for the BIONICLE movies Mask of Light, Legends of Metru Nui, and Web of Shadows and provided commentary on both Mask of Light and Legends of Metru Nui.

Bob later founded his own creative service company, Good Story Productions, that assisted with Web of Shadows. He left The LEGO Group in early 2006 and is currently a consultant with the Paterson James film company.

"My job is to motivate, inspire, and mentor everyone involved in creative writing and movie production for BIONICLE."
— Bob Thompson