Christian Guldberg Faber is the former Art Director for the advertising agency ADVANCE, and one of the original creators of BIONICLE. 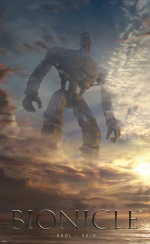 Faber worked on BIONICLE with Alastair Swinnerton, and Bob Thompson and Martin Riber Andersen of LEGO. In particular, he helped to develop the idea of a tropical island setting, which later became the island of Mata Nui.

Since then, he has developed numerous artistic aspects of the BIONICLE universe, and has written scripts to and directed numerous promotional and online animations. In 2004, Comic 20 featured an interview with Faber, Duane Loose, BIONICLE 2 art director, and BIONICLE 2 director David Molina. In the interview, Faber described his work with Jan Kjær on Metru Nui and his inspiration for the island-city's urban design.

Faber also illustrated the map of the desert of Bara Magna and the image of the Mata Nui robot standing on the endless ocean of Aqua Magna.

Beginning in 2012, Faber began posting in a blog entitled Faber Files, and regularly updates it with new concept art and media revolving around BIONICLE.

For the 2015 revival of BIONICLE, Faber initially announced that he would would act as a creative consultant. However, Faber later revealed that he would be leaving ADVANCE to start his own creative company, "Rocket" and developing his own new IP known as Rebel Nature, though he will still liaise with LEGO and ADVANCE as a freelancer.