"The Matoran resistance gave the new Toa Inika information and new weapons, and asked one simple question: 'Will you help us?'"
— Narrator

"Showdown" is the third comic issue of the BIONICLE Ignition series. It was released with the July/August 2006 LEGO Magazine. Issues with a variant cover signed by Stuart Sayger were also released at the 2006 San Diego Comic-Con.

As the Piraka make new plans, the Toa Inika break into their stronghold with no prior warning. Threatening the Piraka, Jaller remembers their first day on Voya Nui. After being turned into Toa by the Red Star, they made many discoveries. They found that their weapons were charged with electricity and their faces gave off a blinding glow without their organic and alive Kanohi on. To Nuparu's excitement, they found their mask powers new and amazing. The Matoran Resistance Group gave the new Toa Zamor Launchers and asked the Toa Inika to help their island.

As the Toa launch into battle, Nuparu uses his mask power of flight and goes right for Zaktan, drawing up Zaktan's Protodites. Zooming out of the stronghold, Nuparu takes Zaktan to a body of water and drops him in. Meanwhile, Hahli is in a close combat with Thok. As Thok uses his eyebeams, Hahli loses her balance and falls. As Thok taunts Hahli, she fires back at Thok, aiming toward his voice. Thok barely dodges the laser beam, and asks Hahli to join the Piraka, calling her attack 'sneaky'. Hahli, disgruntled, fires at Thok squarely, knocking him off his feet. Thok uses his powers and causes two stone hands to erupt out of the ground. As Hahli prepares to break them down, Thok fires at her from behind, hoping for a quick victory. Matoro, seeing this, runs to Hahli's aid and deflects the ice beams while Hahli frees herself.

As Hakann attempts to escape, Jaller notices and engages Hakann in battle. Hakann uses his Heat Vision to attack the Toa, but thanks to Jaller's mask, he dodges all the beams. As Hakann taunts him, Jaller fires a blast from his swords, which Hakann dodges easily. After firing his eyebeams again, Hakann fires his special Zamor. Jaller dodges it, not realizing that he is not the target. As he tries to knock Brutaka out of the way, Thok reaches Hakann. Jaller's efforts are in vain and Brutaka's power is siphoned into the two Piraka. Using their heightened powers, the two Piraka knock both their allies and enemies into submission. Brutaka, shielded by his mental barrier, feels nothing, and the two Piraka force Brutaka to reveal where the Mask of Life is hidden. As Axonn breaks into the stronghold, he warns the Toa Inika of the coming events and reveals to them where to go.

Down in the Chamber of Life, a being stirs. As Vezon and Fenrakk rise from the lava, they sense the coming of the Piraka and Toa and eagerly wait for them. 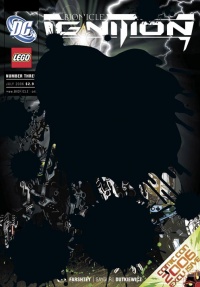 A variant of the Comic Con exclusive cover