This article is about Toa Lesovikk's weapon. You may be looking for Lewa Nuva's Toa Tool. 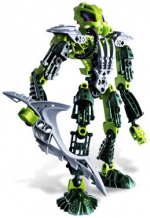 The Air Sword[2] was Toa Lesovikk's Toa Tool. It could be used to channel his power of Air, or for melee combat.

On Spherus Magna, Velika defeated Lesovikk and stole the Air Sword.[3] The sword was left near Karzahni's corpse in the Iron Canyon as evidence that Lesovikk murdered the tyrant.[1]

In Dreams of Destruction, Lesovikk used the Air Sword to unleash a blast of air on Karzahni to break his concentration.

The Air Sword was released in summer 2007 in 8939 Lesovikk. Its upper and lower tips were made of a soft, rubbery plastic.