"Immediately, a strange feeling overwhelmed him. As if a cushion of strength had settled in around him, protecting him from all harm."
— Narrator, Tale of the Toa

The Kanohi Hau is the Mask of Shielding. It allows its user to protect themselves from any physical attack that they are aware of by generating a force field. The only difference between the Great and Noble versions is that the Great version forms a stronger and longer-lasting shield than the Noble version.

Kanohi Hau were made from Growth and Regeneration Kanoka in Metru Nui.

A Great Kanohi Hau in action 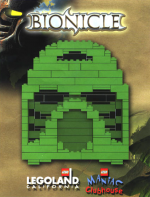 The Kanohi Hau was first released in the color red with the 2001 Tahu set. Released at the same time was a Kanohi Hau hand-painted with the marks typical of Infected Kanohi, included in the "Muaka and Kane-Ra" set and randomly included in several Kanohi mask packs. Kanohi packs could also include the Hau in red, blue, green, white, black, or brown. McDonalds restaurants released a set of the Matoran Jaller in Happy Meals during the month of September that contained a yellow Kanohi Hau in this same shape, later released worldwide in the 2003 "Jaller and Gukko" set.

In 2001, LEGOLAND Park in Carlsbad, California, released a model of the Kanohi Hau made with basic LEGO bricks. It came in green, red, and blue; each had 168 pieces.

In various promotional events, a 14-karat solid gold Kanohi Hau was released as a prize. This version of the mask came with a chain which could be put through two holes in the back of the mask. The theme of these events usually revolved around the idea of the Golden Kanohi which the Toa Mata would obtain after the collection of all their masks.

The Krana packs of early 2002 contained one of six gold or silver-colored masks, including the Kanohi Hau.

In 2004, a golden Kanohi Hau of a new shape was released with the Lhikan and Kikanalo set, worn by Toa Lhikan.

In 2010, two Kanohi Hau were released in the BIONICLE Stars Tahu set, one colored red, and the other gold for the Golden Armor. These Kanohi Hau are smaller than the original incarnation. Additionally, the 2010 Hau utilizes an axle for connection, whereas the 2001 edition used a stud.