The Electric Bug species was created by the Makuta using Viruses and Liquid Protodermis to be one of the Rahi to inhabit the Matoran Universe.[2]

After the Great Cataclysm, Electric Bugs came to inhabit the island of Mata Nui, settling in Le-Wahi. Many were placed under the influence of Teridax.[QftT] A number of Electric Bugs lived in the Nui-Rama Hive, coexisting with Nui-Rama.[MNOG, Ch. 6]

1,000 years into the Great War, the Av-Matoran Takua was accosted by Electric Bugs while searching for Lewa's Toa Stone in Le-Wahi.[QftT]

Shortly afterward, the Nui-Rama captured the Matoran of Le-Koro and put them to work in the hive, where each was monitored by an Electric Bug. On the occasion that a Matoran would falter, they would be shocked by their Electric Bug overseer until they resumed their mining. When Toa Mata Onua arrived to remove Lewa's Infected Kanohi, an Electric Bug crawled onto Onua's shoulder, which he lifted using his Kanohi Matatu and sent flying towards Lewa, knocking off his Infected Kanohi.[MNOG, Ch. 6]

A short time later, these Electric Bugs returned to Metru Nui with the Matoran after the defeat of Teridax.{{CN}}

After the Great Spirit Robot was critically damaged in the Battle of Bara Magna, all surviving Electric Bugs left the Matoran Universe and immigrated to Spherus Magna.{{CN}}

Electric Bugs can generate a mild electrical shock, enough to cause significant pain.[MNOG, Ch. 6] In the wild, hostile Electric Bugs can be identified by the high-voltage bolts of electricity crackling between their lengthy antennae. A placated Electric Bug will stop actively generating electricity since it no longer perceives a threat.[QftT]

Electric Bugs were most commonly found in the jungles of Le-Wahi.[QftT] Under the influence of Teridax, Electric Bugs and Nui-Rama developed a symbiotic relationship in the Nui-Rama Hive.[MNOG, Ch. 6]

Electric Bugs can be found in a variety of colors, including bright blue[MNOG, Ch. 6] or purple and yellow.[QftT] Their size may vary, ranging from as small as a Toa's shoulder to nearly as large as a Matoran. Smaller Electric Bugs are light enough to be easily lifted with a Noble Kanohi Matatu.[MNOG, Ch. 6] 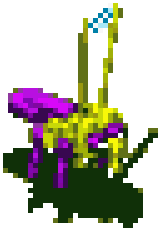 An Electric Bug in Quest for the Toa