Tahu is a character from LEGO BIONICLE, first introduced in 2001.

Tahu was part of BIONICLE's debut in 2001, one of six main characters that were released in canisters, and appeared in the supplementary transmedia releases that year. The character was featured as a main player during the first three years, but became a background character in following years due to set and media releases focusing on others. Tahu again became a main character in 2008 with a new set release, and again in 2010, the last year of BIONICLE's first generation.

In the story, Tahu is a Toa, a noble warrior who protects the villagers of the island of Mata Nui, and controls the elemental power of Fire.

Tahu has been released as four sets, and appeared or been referenced in several others. 8534 Tahu was the first set created[citation needed] and was released in summer 2001 as a Toa canister set. With thirty-three pieces, one could rotate the gear on the back of the model to make it swing its sword with its right arm. The parts and instructions of this set could be combined with the parts and instructions from the Onua and Pohatu sets of the same year to build the Toa Kaita Akamai using instructions split between the three sets' instruction booklets. In 2001, around three million Tahu sets were sold.[citation needed]

8572 Tahu Nuva was released alongside the other Toa Nuva in the summer of 2002. It had thirty-six pieces. This new Tahu featured Nuva armor, new legs pieces, a new Kanohi, and his new Magma Swords. When one spun the gear on his back, both arms would swing in opposite directions, although by moving a gear and axle from the left shoulder to his back and replacing them with a pin, two different action features became available. In this mode, the operation gear on the back could be spun to cause the right arm alone to swing, or the smaller gear from the shoulder could be pulled to fix the operation gear (and thus the right arm) in one position. His Magma Swords could be attached to either side of one of his feet to act as a Lavaboard. By combining his parts and instructions with those of 8566 Onua Nuva and 8568 Pohatu Nuva one could build a model of Akamai Nuva, with instructions found in the backs of the three sets' instruction booklets. 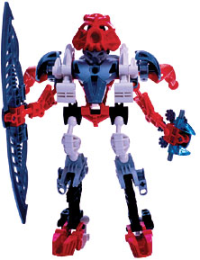 Instructions for a non-canonical combiner model titled Inspiriation Model #4 were released on BIONICLE.com, and combined the parts of 8572 Tahu Nuva and 8575 Kohrak-Kal.[1] On the Japanese version of the website, this figure was known as Volcano Knight Tahu.[2]

8689 Toa Tahu was released in the summer of 2008 in a new Mistika form of the Adaptive Armor. It contains seventy-three pieces. This form's back features an attachment point for a 2008 Matoran set, although no Matoran was released specifically to ride with him in either the set or the story (The canister demonstrates the feature with 8945 Solek). Tahu Nuva Mistika also wields a Nynrah Ghost Blaster that fires soft, gunmetal colored ammunition pieces in his left hand and his new Rotating Blades in his right. Parts from Tahu's 2008 form can be combined with the parts of 8688 Toa Gali and 8690 Toa Onua using instructions on LEGO.com to create the Order of Mata Nui member Trinuma.

7116 Tahu was released as part of BIONICLE's final set line, the BIONICLE Stars. The set design was meant to resemble the default form of his Adaptive Armor as a Toa Mata and contains nineteen pieces. Six individual pieces distributed throughout the six BIONICLE Stars sets are intended to be added to Tahu to represent the Golden Armor. Tahu's set includes a Golden Hau as part of his Golden Armor. Tahu could be combined with the five other Stars to form Gaardus; the instructions for the set were released on BIONICLE.com.

There have also been non-brick products depicting or featuring Tahu. As a promotion for the film, BIONICLE: Mask of Light, Tahu appeared as one of a set of UK Burger King toys in 2003. This toy depicted Tahu Nuva as he appeared in the movie and is not compatible with Lego parts. Tahu in his Mistika form was also part of McDonald's BIONICLE "Happy Meal" promotion in late 2008. This was a small action figure and was also not compatible with Lego parts.

Several large Tahu statues were constructed entirely out of LEGO System bricks for promotional usage. They were displayed in the LEGO Imagination Centers in Downtown Disney at Disneyland, Downtown Disney at Walt Disney World, and the Mall of America.[citation needed]

Tahu has appeared in the various comics, novels, and animations released by LEGO and partners; he is also the only character to be on the cover of both the first and last comics, and has been on more comic covers than any other character. Tahu had a supporting role in the direct-to-DVD animated film BIONICLE: Mask of Light, where he was voiced by Scott McNeil.

Tahu means "burn" in the Māori language. During the prototype stages of BIONICLE, Tahu was named Flame.