"Oh, if you are a hero, you are just what we need. Help us, and perhaps we can help you."
— Spectral Mask

Journey of Takanuva is the first BIONICLE level 3 reader book, released in September 2008. It covers what happened to Takanuva following Swamp of Secrets up until the events in The Kingdom. Jeremy Brazeal provides illustrations on every page of the book.

After passing through the portal made by Brutaka, Takanuva soon exits through another portal and falls out of the sky. When he lands, he finds himself in a dark forest, and soon comes across the Spectral Mask. At first, Takanuva believes he is hallucinating, as masks normally do not talk. His thoughts, however, do not seem to be acknowledged by the Mask, who talks about its relief of Takanuva's arrival and informs Takanuva of trouble in a nearby village. Without hearing what caused the trouble, Takanuva quickly walks off to help the village. 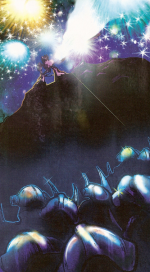 When Takanuva arrives at the village, he sees a large group of Kestora fighting against a large, monster-like creature. Deciding that the creature is the source of the commotion, Takanuva quickly assaults the creature and drives it off. Turning back to the entities, he expects applause and thanks, but instead, he finds himself being laughed at and locked out of the village.

Distressed, Takanuva goes back into the forest and finds the Mask. He informs it of what happened, and the Mask, shocked, tells him that the members of the creature's species are actually the peaceful inhabitants of the village, and they had been driven out of their city by the Kestora. It also informs Takanuva that the one he fought off was the last one residing in the village. Takanuva, quickly noting his mistake, runs off to find the creature and apologize. He succeeds, and together they hatch a plan to steal back the city.

At night, Takanuva stations himself outside the village and shoots fireworks into the sky. The Kestora quickly swarm out of the village and watch the fireworks in fascination. While they watch and enjoy themselves, the creature burrows back to the city and seals the gates, locking the Kestora out and reclaiming the village.

Having finally accomplished his task, Takanuva goes back to the Mask, who congratulates him and opens a portal. Takanuva enters it, and is transported once more into another dimensional voyage in the The Kingdom Alternate Universe.