Whenua charging a Rhotuka with the Thumpers 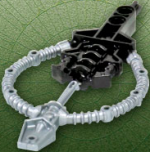 A Thumper in set form

The Thumpers were Toa Hordika Whenua's Toa Tools. They were mutated from Toa Metru Whenua's Earthshock Drills when he was exposed to the Visorak's Hordika Venom. They could be used to summon underground Rahi, charge up his Rhotuka Earth spinner, or dig through rubble. They could also function as a melee weapon.

In Web of Shadows, Whenua used his Thumpers to free Rahaga Norik from the rubble which Vakama Hordika had trapped him under.

The Whenua Hordika set released in 2005 contained two identical parts representing his Thumpers. The base of the piece was made of hard black plastic, while the end of the piece was made of softer, more rubbery silver colored plastic. The flexibility of this silver section allowed it to slide up and down within a tube-like portion of the base, emulating the motion of a jackhammer.