Important Notice
There is a need for a notice.

Notice
The list of Bionicle Inconsistencies and list of Bionicles Doing Stupid Things are both incomplete. They are a work in progress. If you have ideas please post them here

Notice
These are not in order of insanity.

1. Teridax's Plan. Need I say more? He could have done what he did a lot easier. Rather than go through a convoluted scheme he could have just brainwashed some toa and have them wake Mata Nui up. Really, his plan only needed three things; Put Mata Nui to sleep, Kill anyone who could oppose me, and wake Mata Nui (make sure to possess his body). But instead look what he does! If one thing had gone wrong he would have died. If Matoro was a little slower, no more Teridax.

2. In Bionicle Legends 3 Power play a strange thing happens. All of you ultimate bionicle fans know who Zaktan is right? Well in that book he has a chance to kill his opponents (the toa Inika). But the really really kind Zaktan choses to spare them. After the piraka and toa knocked each other out, Zaktan reformed himself. In the book it says that there was no one conscious on the battlefield to see Zaktan's protodites reform his body. Zaktan could've killed the toa but for an unexplained reason, refrained from doing so.

4. We're back to Zaktan. On several occasions Zaktan loses many of the protodites that make up his body. Yet Zaktan doesn't get any smaller. For example, Tahu toasts Zaktan's sword yet Zaktan just reforms it without shrinking a bit. By this time Zakatan should be really miniscule.

5. Matoran die. Matoran get replaced, No one nows how.

6. OK now this is just stupid. Greg says that all bionicle's have "magnetic hands". It's also in the 1st movie. So all bionicle have magnetic hands. Think about that for a bit. But this is never seen anywhere else in bionicle. Insanity.

7. When The Toa Mata Nuva become the Toa Mata Nuva Phantoka/Mistika, they apparently just don armor. But in the sets their masks change and they get taller, and bent over. They looking nothing like they used to! 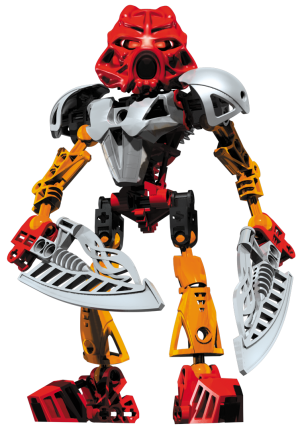 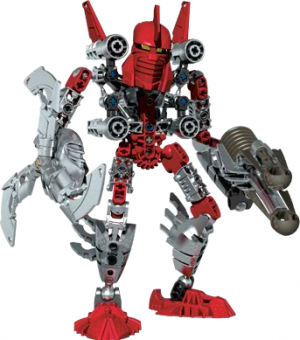 8. The Toa Metru leave Turaga Dume behind. They save all the matoran but they leave they're turaga! Apparently Turaga Dume (according to his article) decided to stay behind; in a city invested with large dangerous Rahi, giant spiders, and mechanized beings with one goal in life KILL, KILL, KILL. The toa chose to let him stay. Really, I sense a power grab! Obviously the Toa Metru left Dume behind so they could rule the Matoran of Metru Nui without Dume's interference.

10. Look at the propellers on Pohatu Mata Nuva Phantoka. They could never keep a fat guy like him up.

11. Many times bionicles get flung across a city and survive. For example, Keetongu falls off a massive tower and survives with no major injuries. Vakama gets blown up and thrown across the city. Why don't they die??!!

12. This could very well be the craziest. Mata Nui (Being) hits the bionicle world, and leaves no gaping impact crater. When the big guy hit, he should have done some serious damage. He's about 7, 500 miles tall. That's more than a fourth of the size of the planet. In contrast, the rock that killed the dinos was a merely 5-6 mile long rock. When Mata Nui hit, he should have split the planet, and shattered it completely. Even if he had been traveling very slowly the impact would have reeked havoc. The planet's orbit and rotation would have been thrown into disarray. The Atmosphere would have combusted. Everyone would have died. But no, Greg says that the rules of Physics don't applied.

The Life of an Average Bionicle

Notice
The above is ambiguously canonical

Notice
These are not in order of insanity.