This is a combiner model portraying a Rahkshi-like creature. In Japan, it was named along the lines of "Fuurahk" (フーラーク fūrāku).[1] On the English BIONICLE.com site, it was titled Inspiration Model #1.[2] It has no storyline significance. 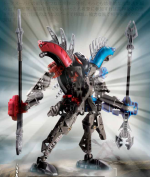 The model as seen at the end of Comic 14

This model can be built using pieces from 8590 Guurahk, 8591 Vorahk, and 8592 Turahk. At first, this model, alongside with three other models was published in the Asian LEGO magazine in 2003, then it appeared on the BIONICLE.com Builder's Section. There were no instructions, but rather a single image and the tip.

"Tip: Use the Rahkshi shoulder parts to create the body of this imposing character."

However, partial instructions for an identical model, using 8587 Panrahk in place of Turahk, were released in a Korean magazine.[3]

This model would later be advertised in Comic 14: At Last -- Takanuva!, with a note that it was "manga inspired."