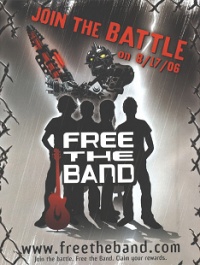 Teaser poster for Free The Band

Free The Band was a non-canon, real-life advertising campaign that started in mid-2006, featuring the Piraka and the newly released Toa Inika. The campaign featured an American alternative rock band, the All-American Rejects, who had been "kidnapped" by the Piraka, and the efforts of the Toa Inika to "free them."

The following websites were made to promote the campaign.

According to this site, the All-American Rejects were kidnapped by the Piraka. The site gave clues on how to find the band, in the form of videos, biographies on both the band and the Toa Inika, and games such as Island Investigation and Voya Nui Adventure. Island Investigation was a game in which the player controlled Piruk through five different levels of Voya Nui, encountering riddles and clues on the band's location whilst trying to avoid the Piraka. In Voya Nui Adventure, the player controlled each of the six Toa Inika through different levels of Voya Nui, while collecting tablets that allowed you to download music, clues on the band's location, and defeating the Piraka along the way.

Scattered trough the site were hidden downloads, disguised as stains shaped like the Toa Inika's Kanohi, among which was a demo for BIONICLE Heroes.

The site was run by "Zack" and "Ivan." There were two sections, the "BLOG," and "GALLERY." The blog featured Zack and Ivan's thoughts on the All-American Rejects' disappearance, with Ivan playing the skeptic and Zack playing the believer. Meanwhile, the gallery featured artificial fan-art of the Toa Inika, created by the LEGO Group for the promotion. The fan art contains various BIONICLE and All-American Rejects sketches, some of which included images from later official comics.

This website sponsored the ship on which the "All-American Rejects" were scheduled to perform their musical act in. However, the ship lost radio contact when it sailed near an "unknown island," and the band was captured by the Piraka.

The site featured relatively little content. There were links to different fleets of charter boats, all of different sizes for "different-sized rock bands." Other various links led to different places around the site, including an "About Us" section, a "Testimonials" section, and pictures of the "founders". Whenever the cursor scrolled over a link, the stylized "Piraka" logo would show for a split second.

There were several commercials on Cartoon Network and Nickelodeon that advertised the contest as well as prizes. It was also featured on Teletoon in Canada.

There were three prize packages offered: Grand, First, and Second.