The largest set of the initial Monkie Kid line, Monkie Kid's Team Secret HQ (MKTSHQ? Ugh) is by all appearances a giant boat. But will this barge sink in the scalding waters of our criticism?

Honestly I couldn't even get a proper shot of the box it's so dang big. Go to LEGO.com if you want to take a look at it. However, there's actually ANOTHER box on the inside! I'm not particularly familiar with this packing method, it's possible they've done it before, but not on the last big-ticket items I've been able to get. Not everything was contained inside, but a good 2/3rds of it. 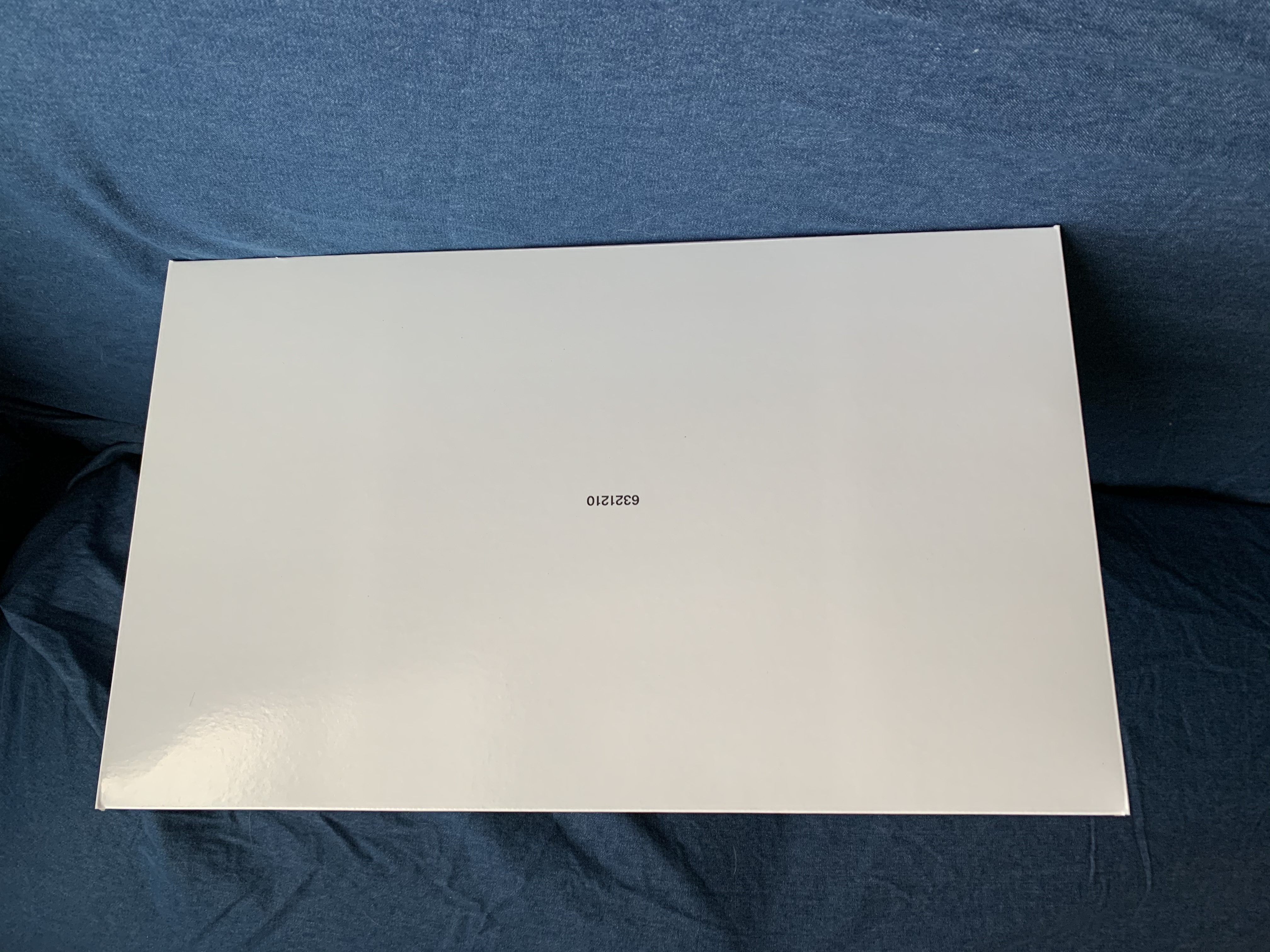 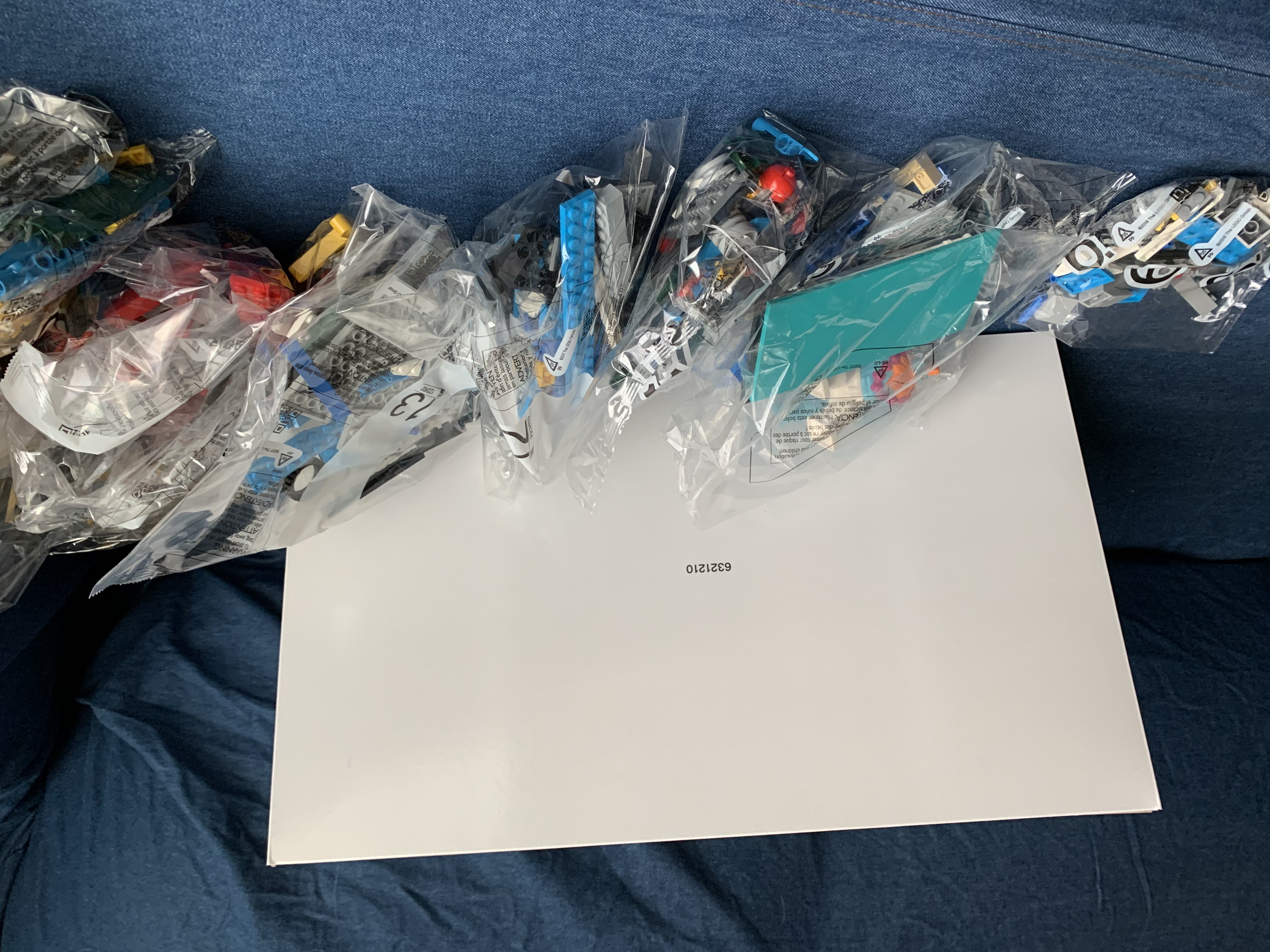 Given the segmented building process (FIVE booklets!) it's hard to get a sense of unique or interesting pieces without opening up all of the 19 bags, which isn't always feasible. I will say broadly that there weren't actually a lot of unique parts this time around; most of the interesting bits are stuff we've seen before. Probably the most unusual were the curved panels that help shape the front of the boat. You tend to see these in Technic sets featuring cars and the like, it's less common in System. 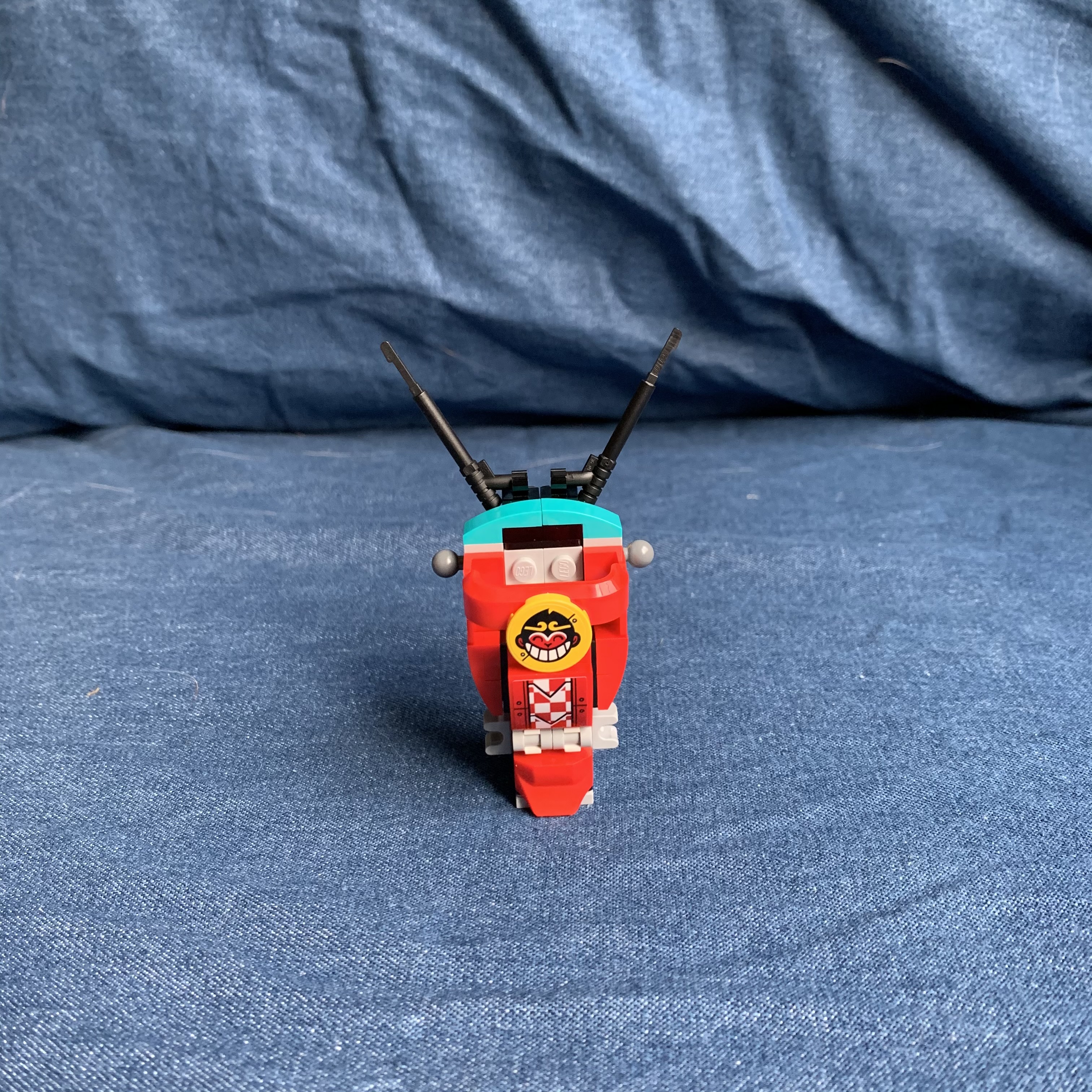 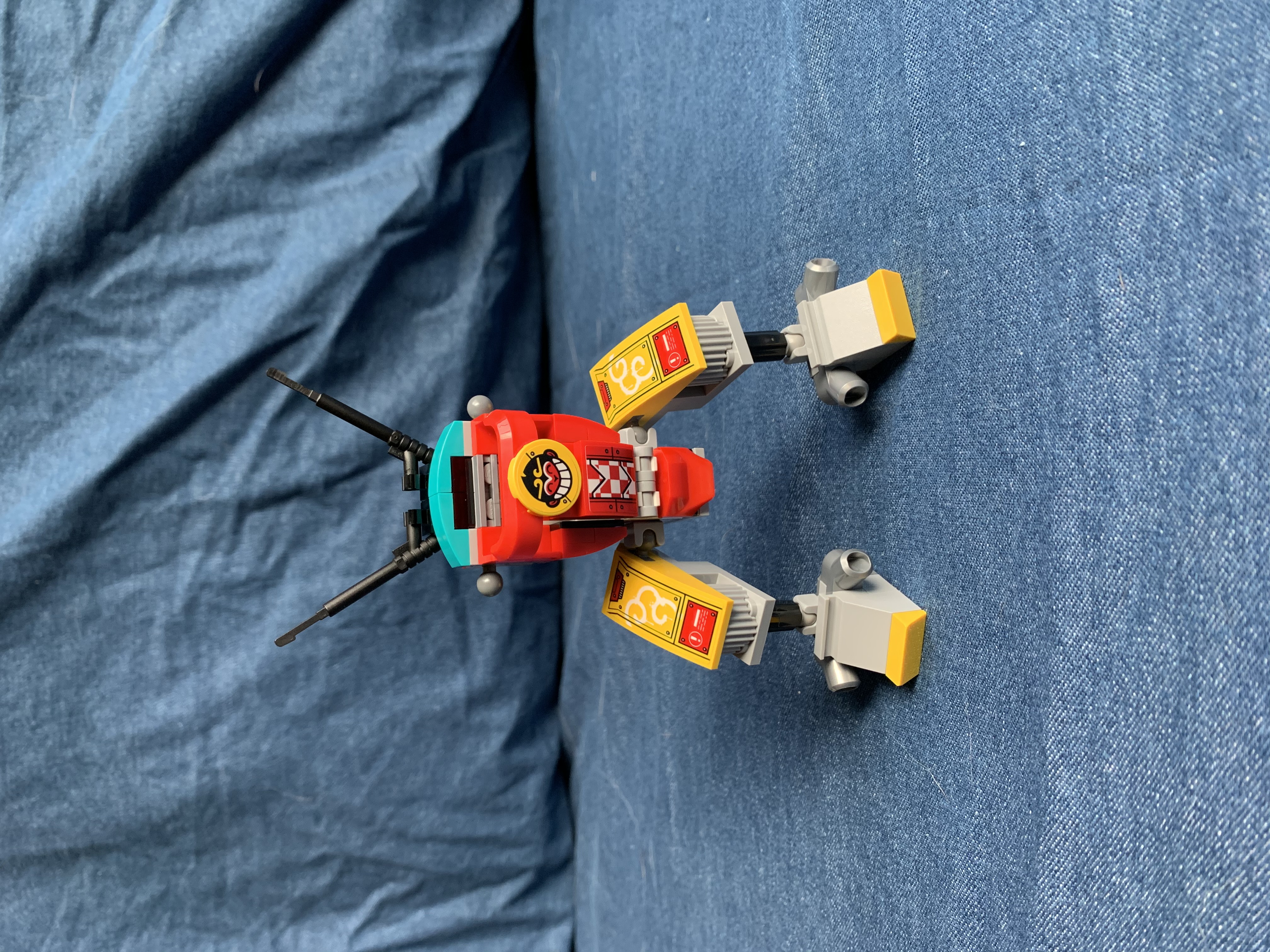 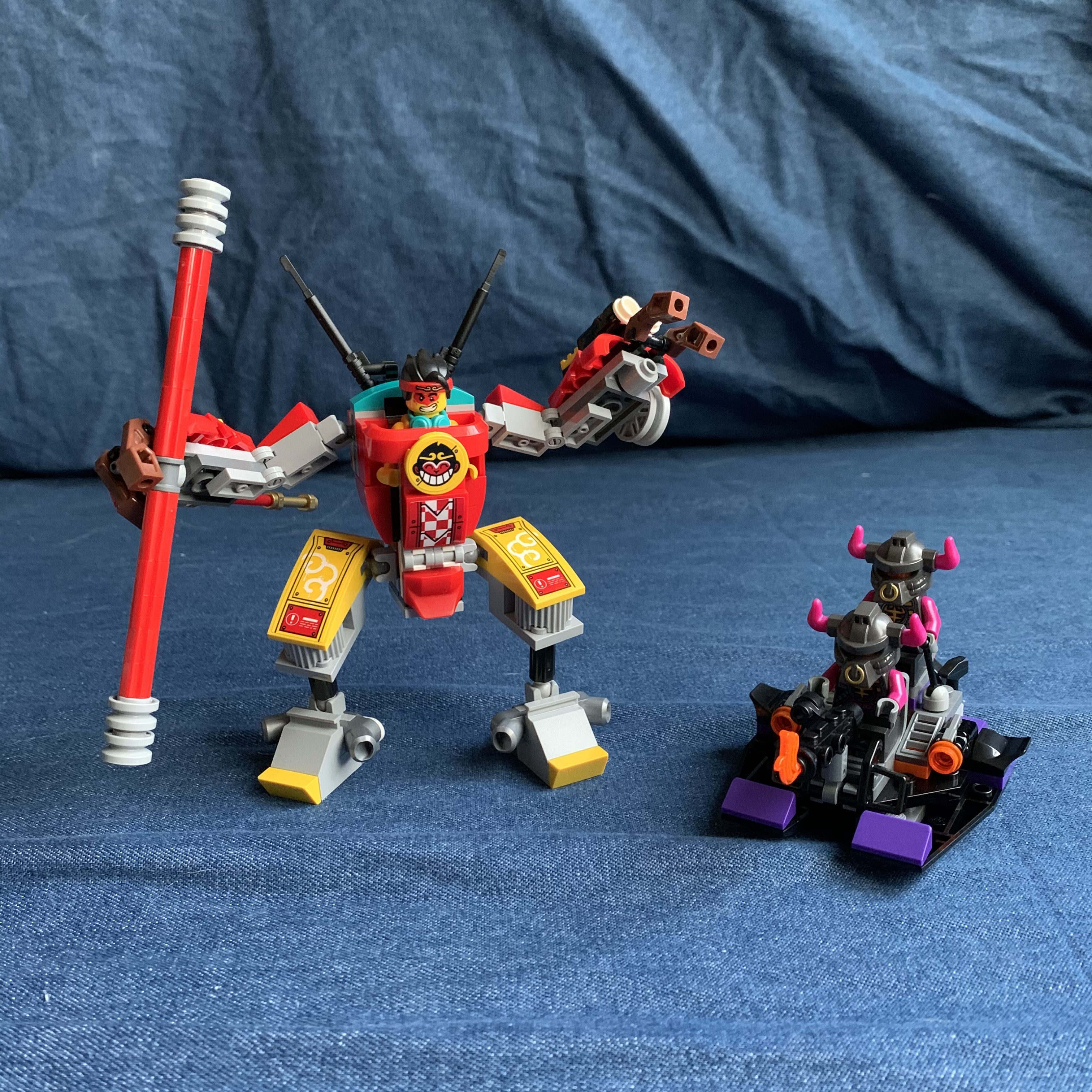 HQ actually starts you off with some of the little vehicles that populate the scene. The first in this case is one for the eponymous Monkie Kid, a sort of miniature riff on the larger Monkey King Mech. This one's pretty cool, although the hinge-based arms feel like a time bomb; it won't be long until they're super loose and unable to pose.

There's also a little boat for the bad guys, basically the only presence they have here. I've been disappointed with most of the Demon Bull King stuff, minus the King himself who's amazing, but it doesn't take up too many pieces so that's fine. 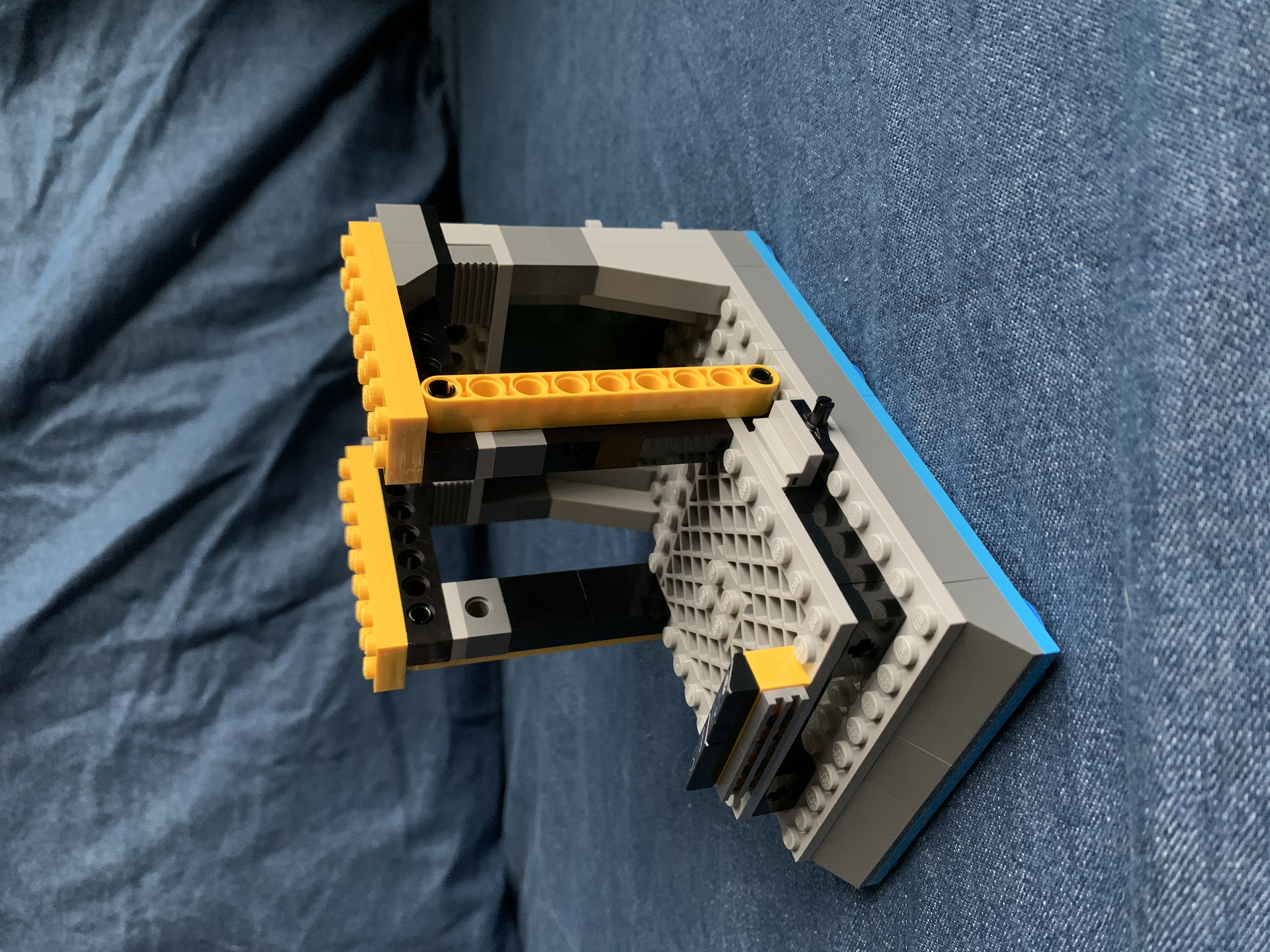 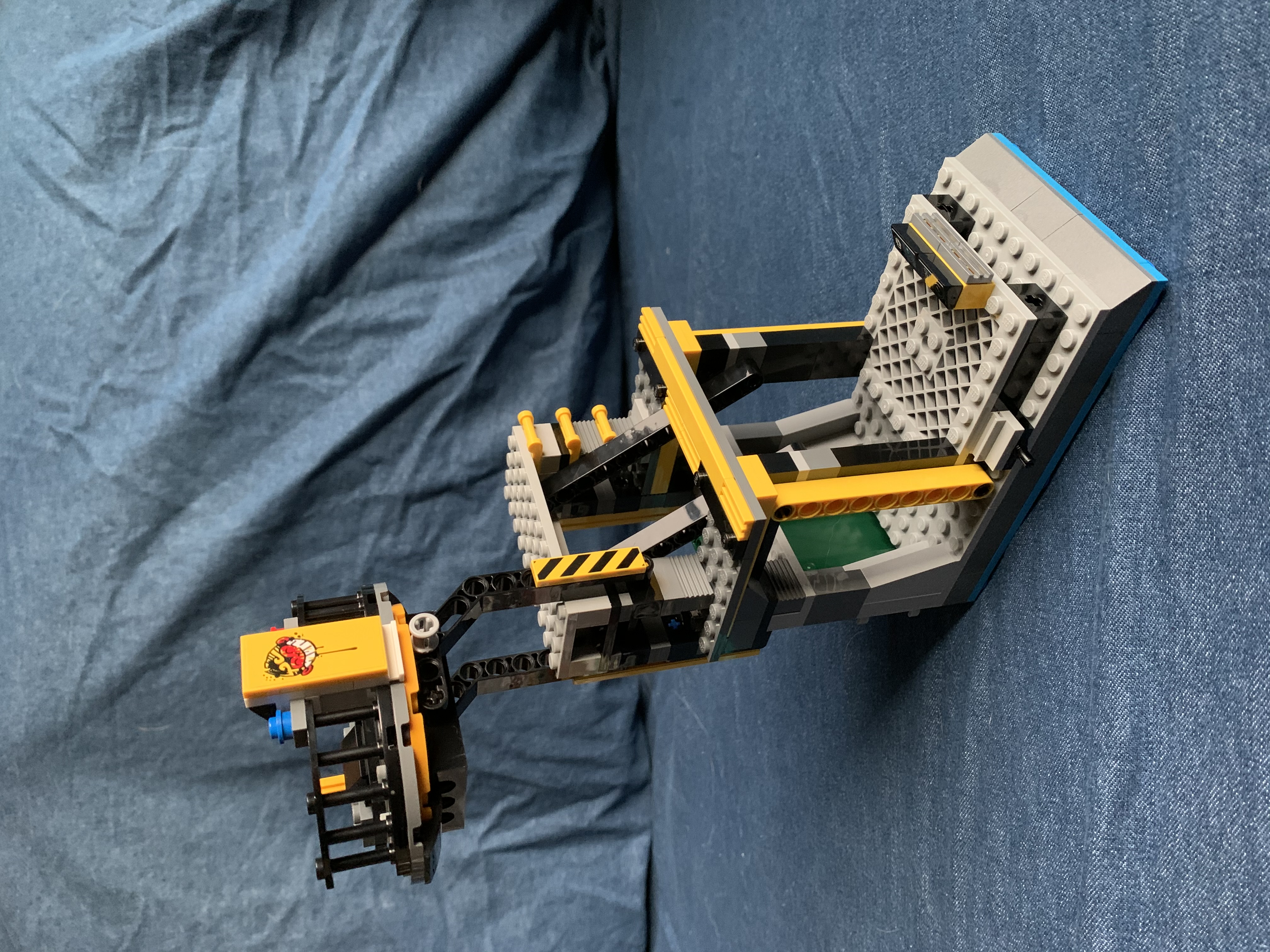 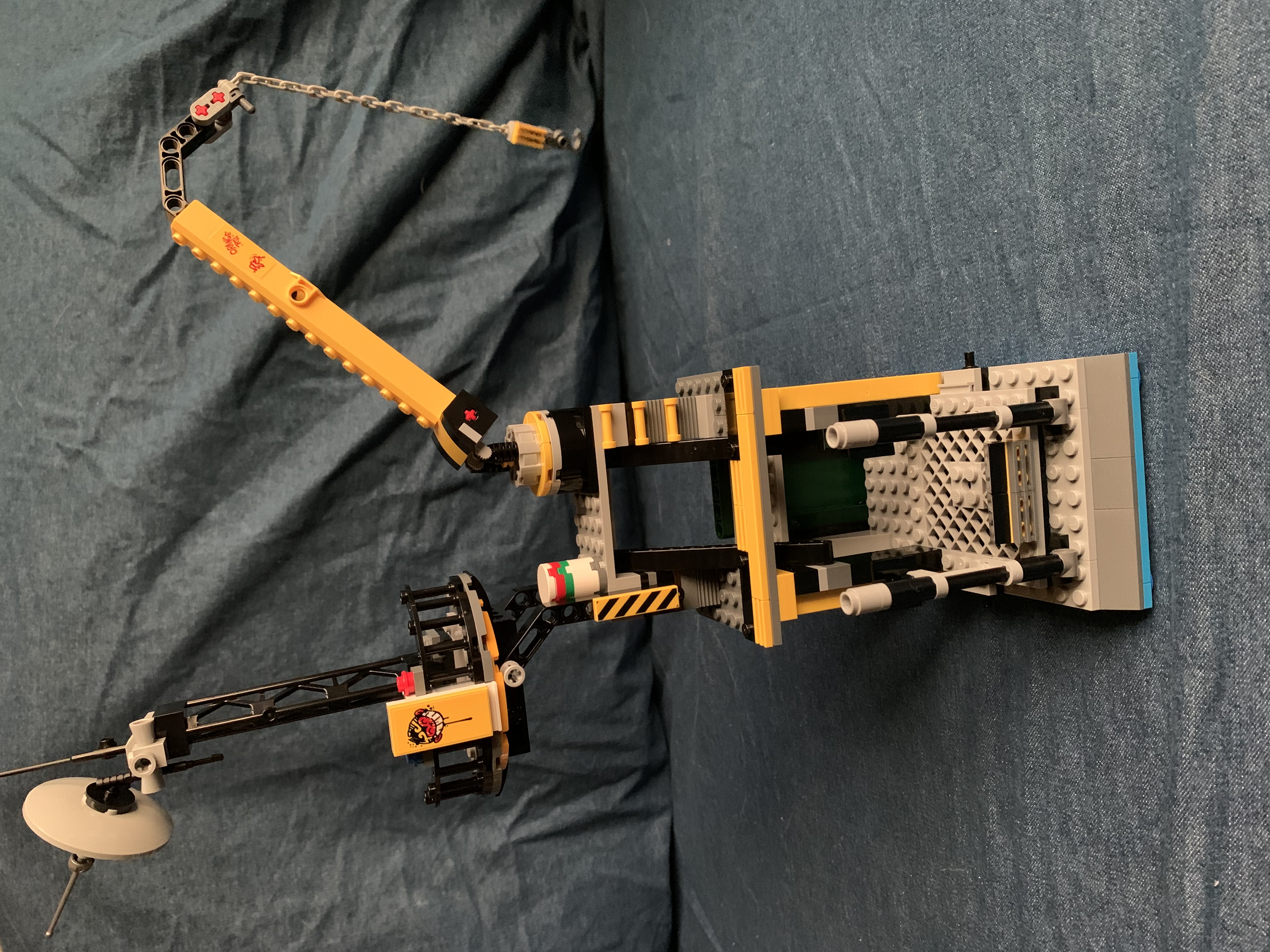 The next bit is the crane, which honestly is super fun. At times it feels like they went a bit TOO vertical, but for the quasi-industrial feel they were going for, the crane helps sell. 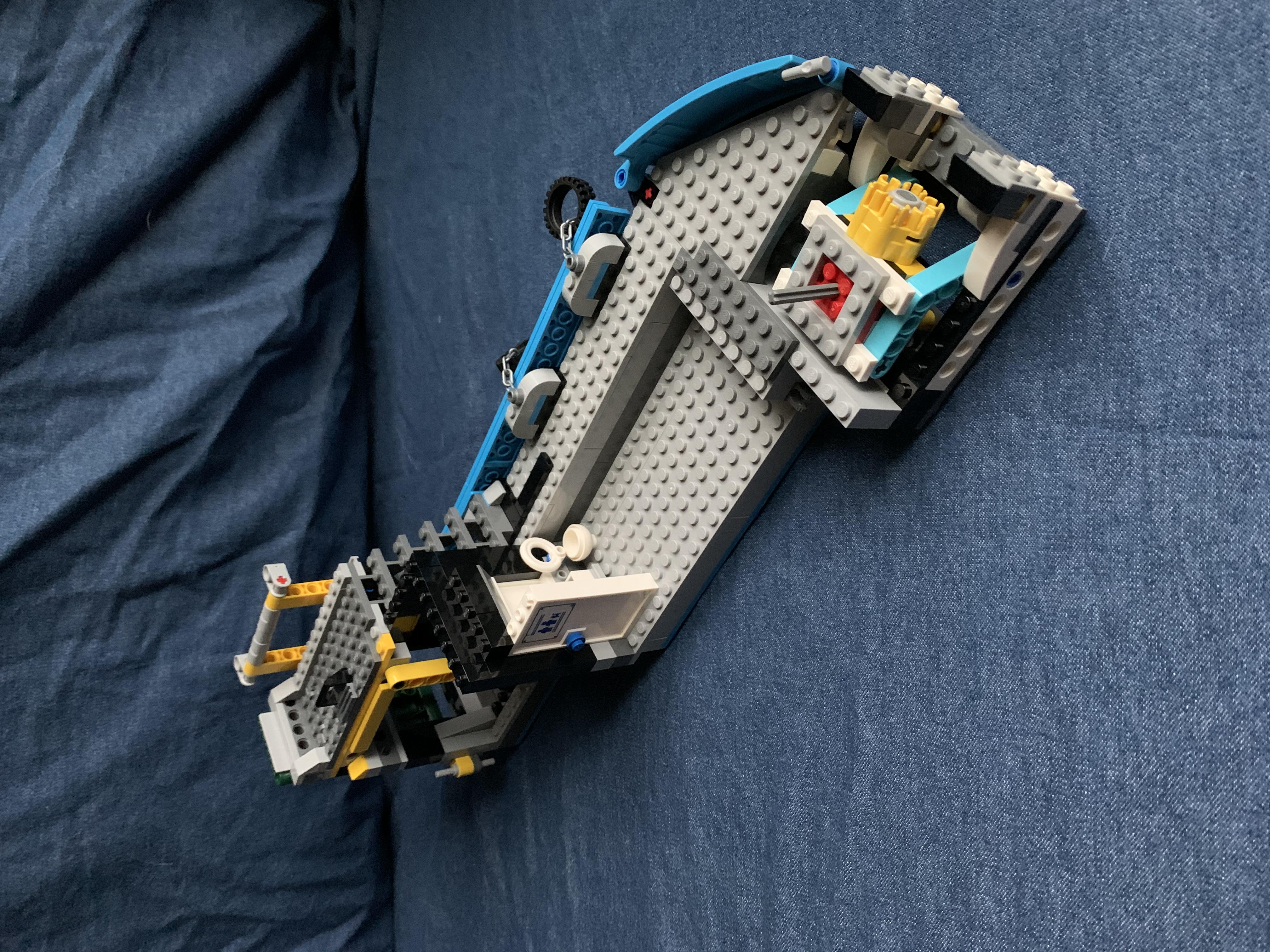 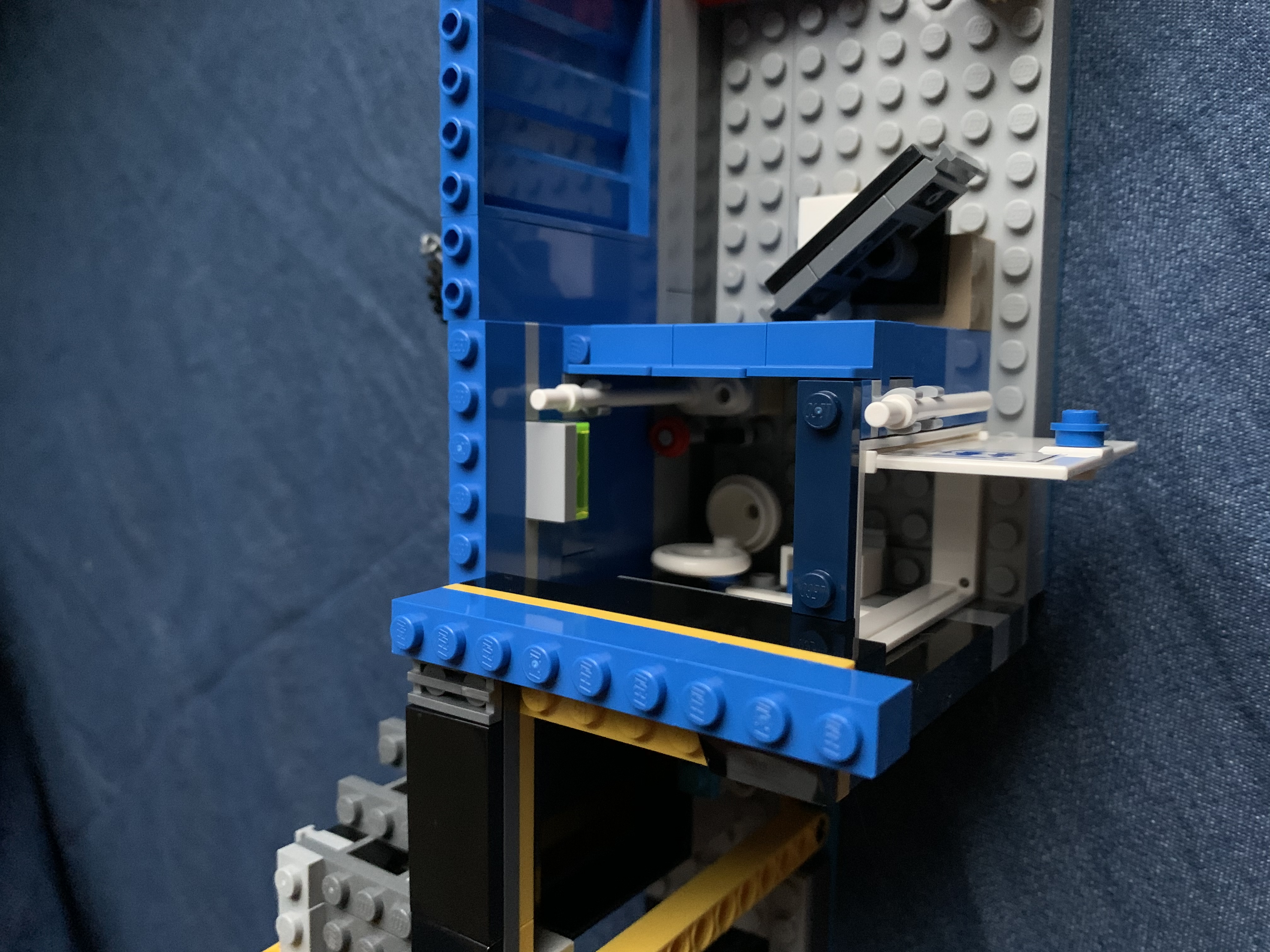 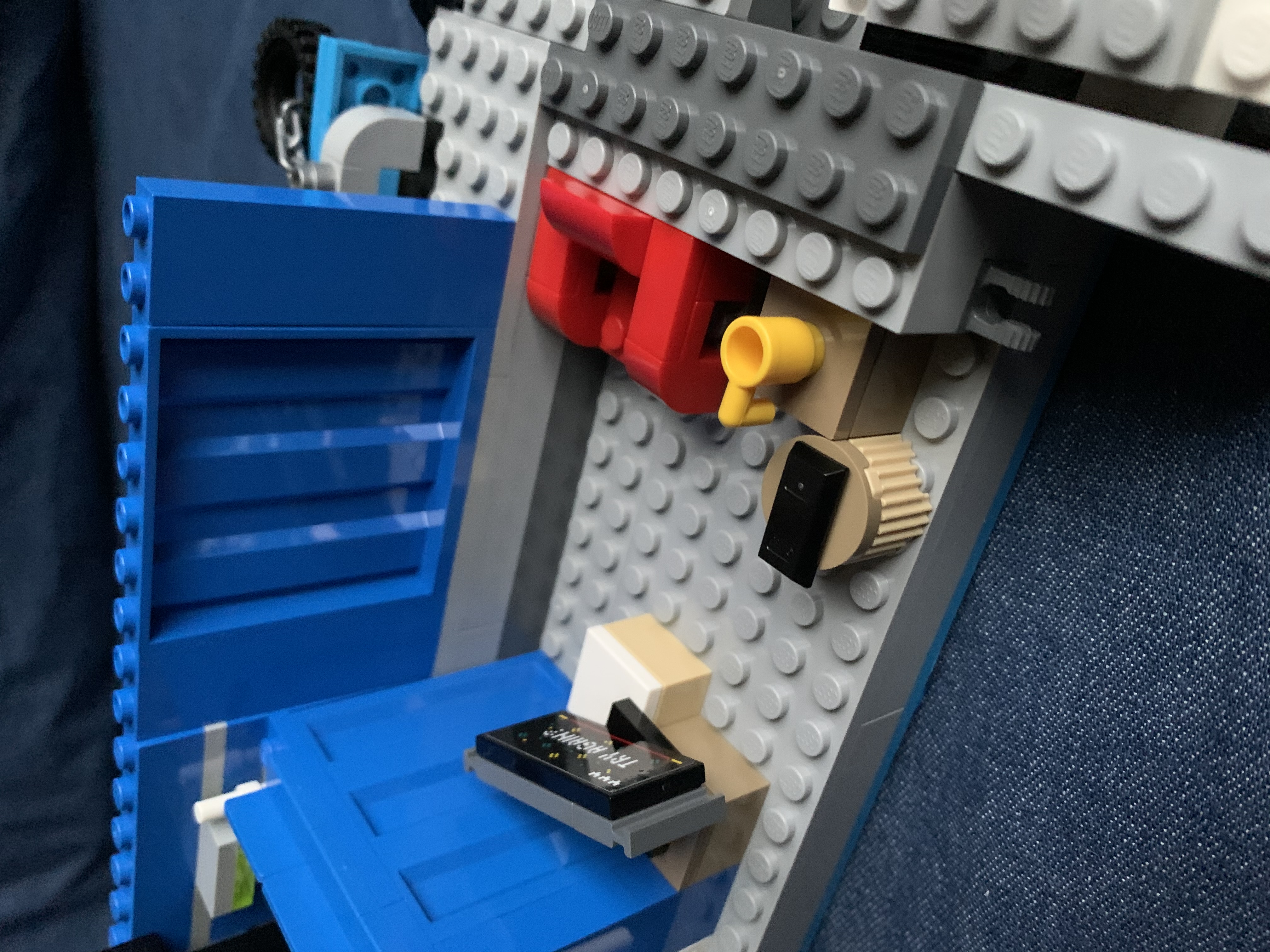 Up next is the first half of the boat; there's some super cool shaping going on in the sides, especially when you get to the prow and use the aforementioned curved panels. There's even a stud shooter (RIP 2015 BIONICLE gone but not forgotten) at the front which feels a tad unnecessary, but hey, more features never hurt.

The real good stuff, though, is the rec area that takes up part of the interior; with a television screen, comfy armchair, and coffee, what more could you need?

I'll tell you what: A BATHROOM. I'm sure this isn't a first for LEGO, but it's certainly the most time I've ever spent detailing lavatory facilities. Obviously on a boat it's a necessity! There's also a cathouse, but I'm just going to pretend that's a litter box. Kitty's gotta go too. 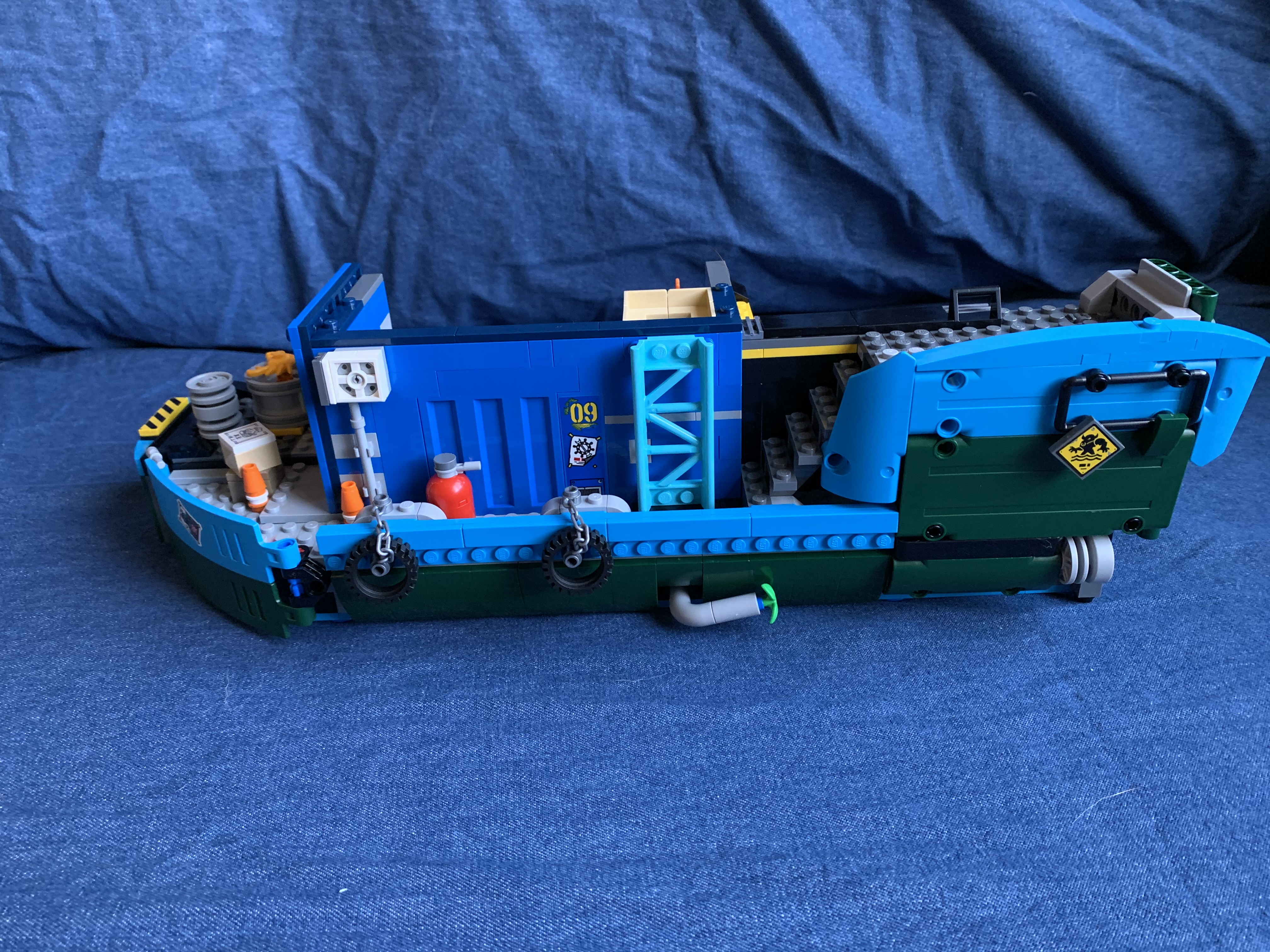 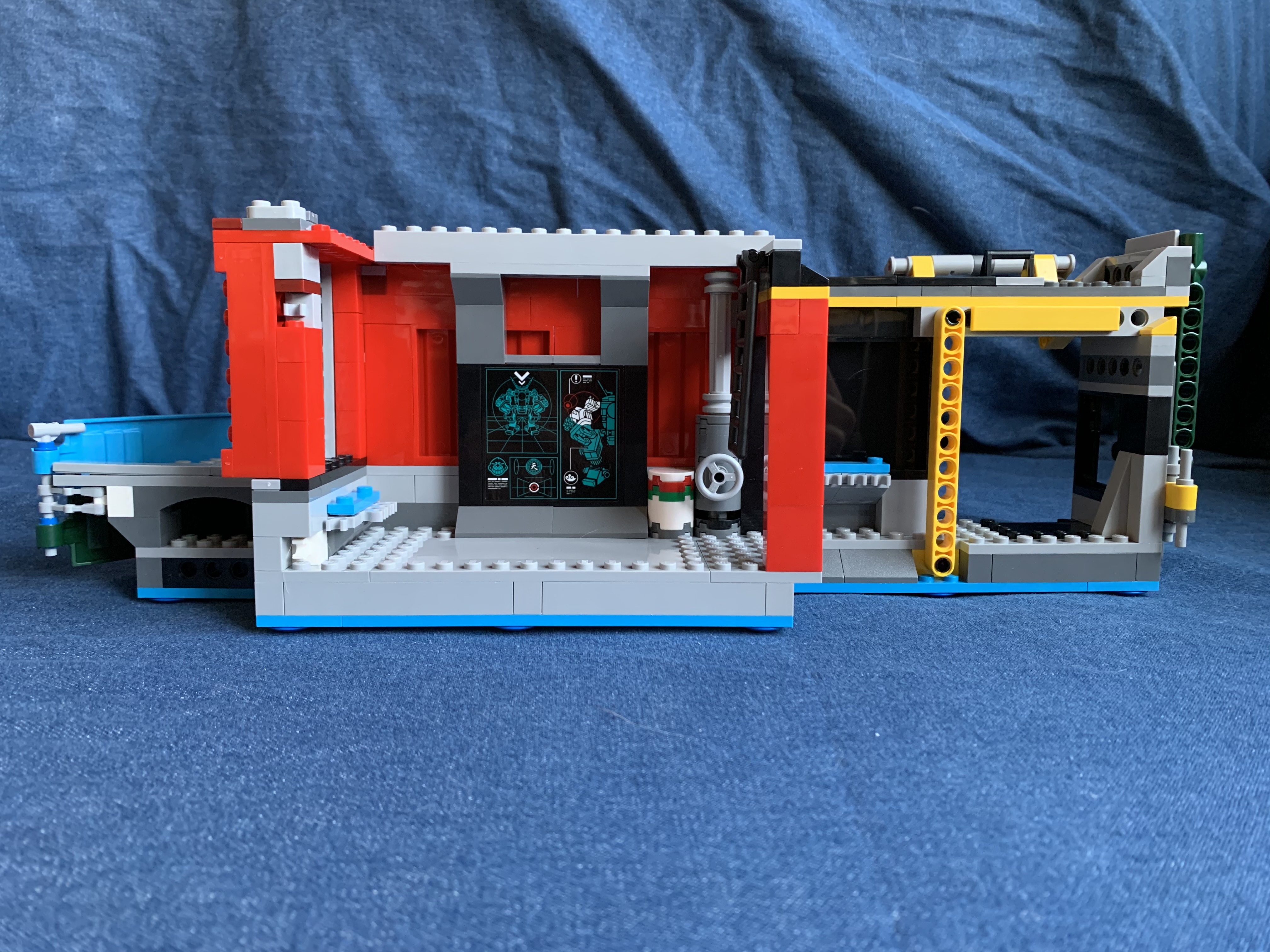 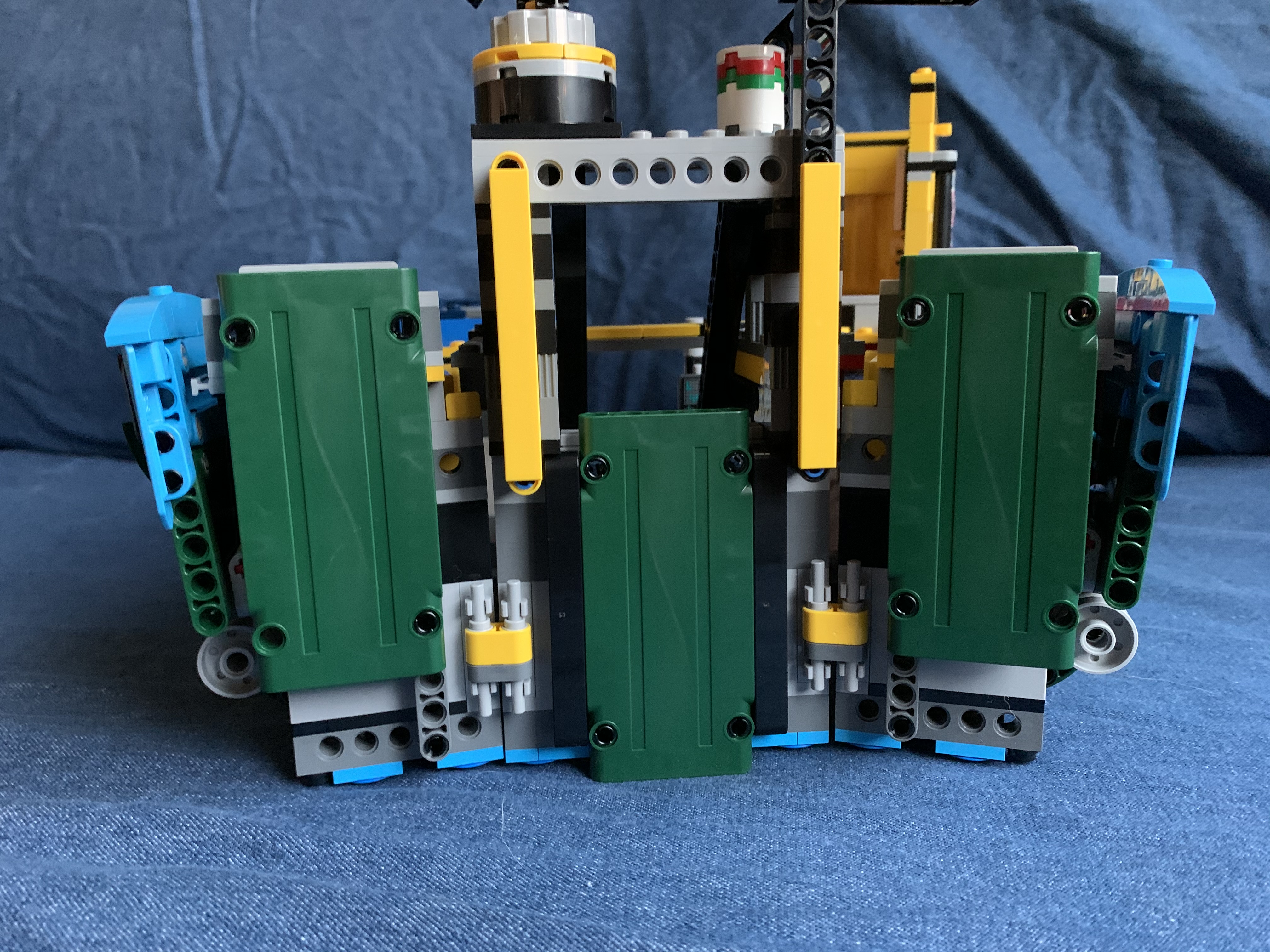 The second half is pretty similar to the first, but it has a couple of necessary differences that prevent it becoming too monotonous, and it's the only time the construction has to double back, so it doesn't feel like a waste of time.

That said, it is a little boring; a wide open space with a "monitor". There were a bunch of stickers in this one, perhaps too many; not that everything could be printed (and LEGO has made some great strides in sticker-making technology) but it's a bit much. 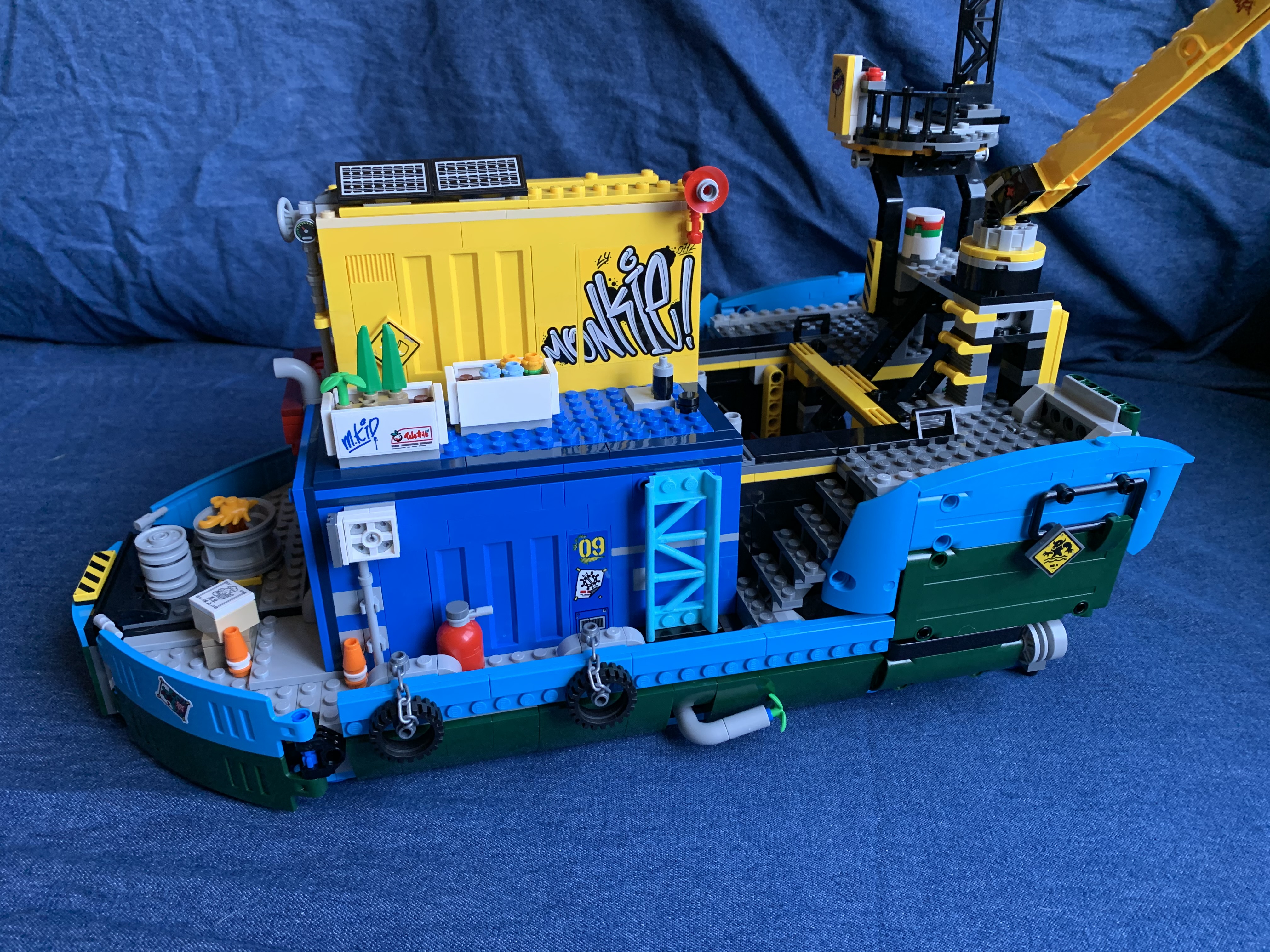 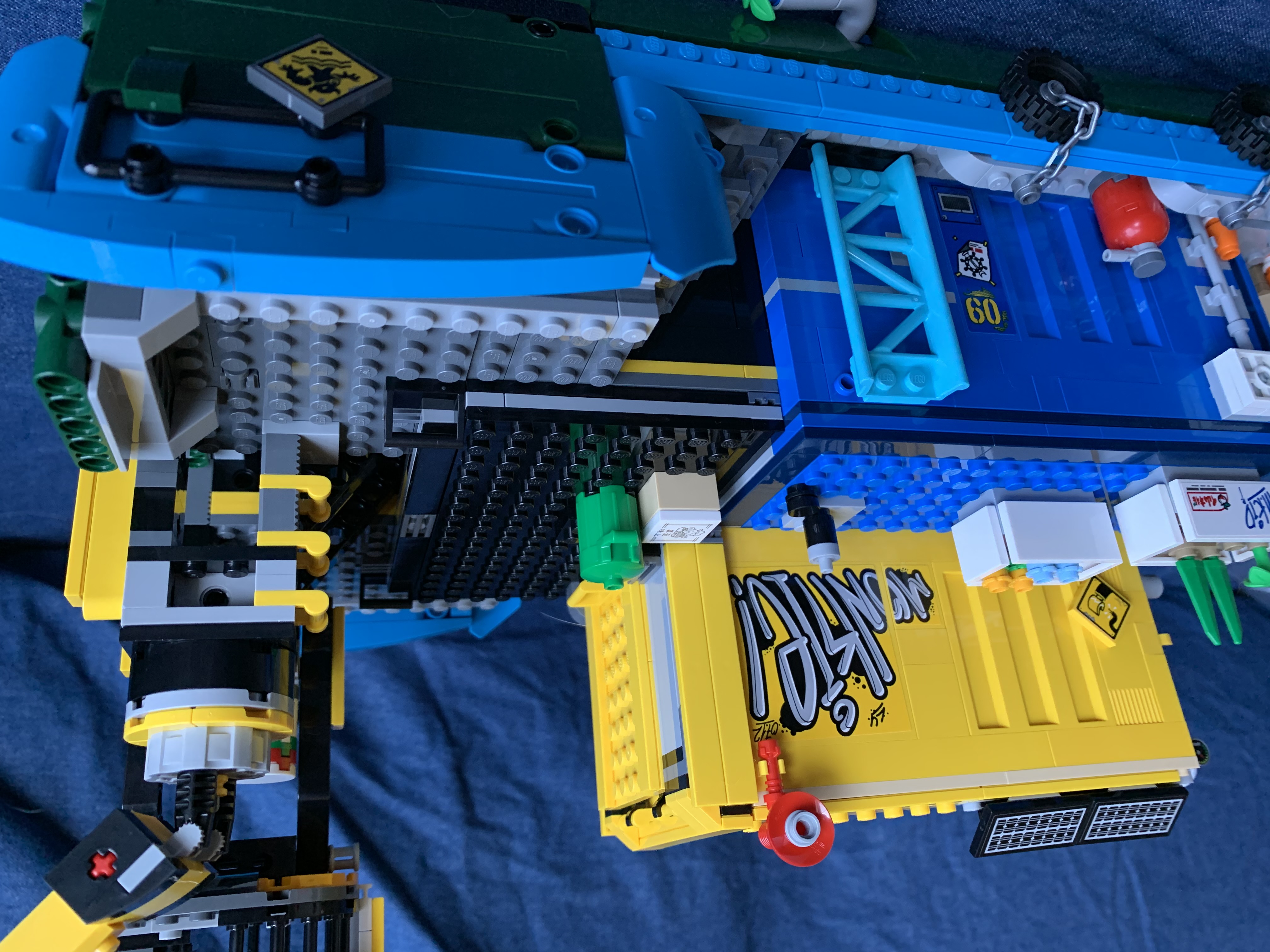 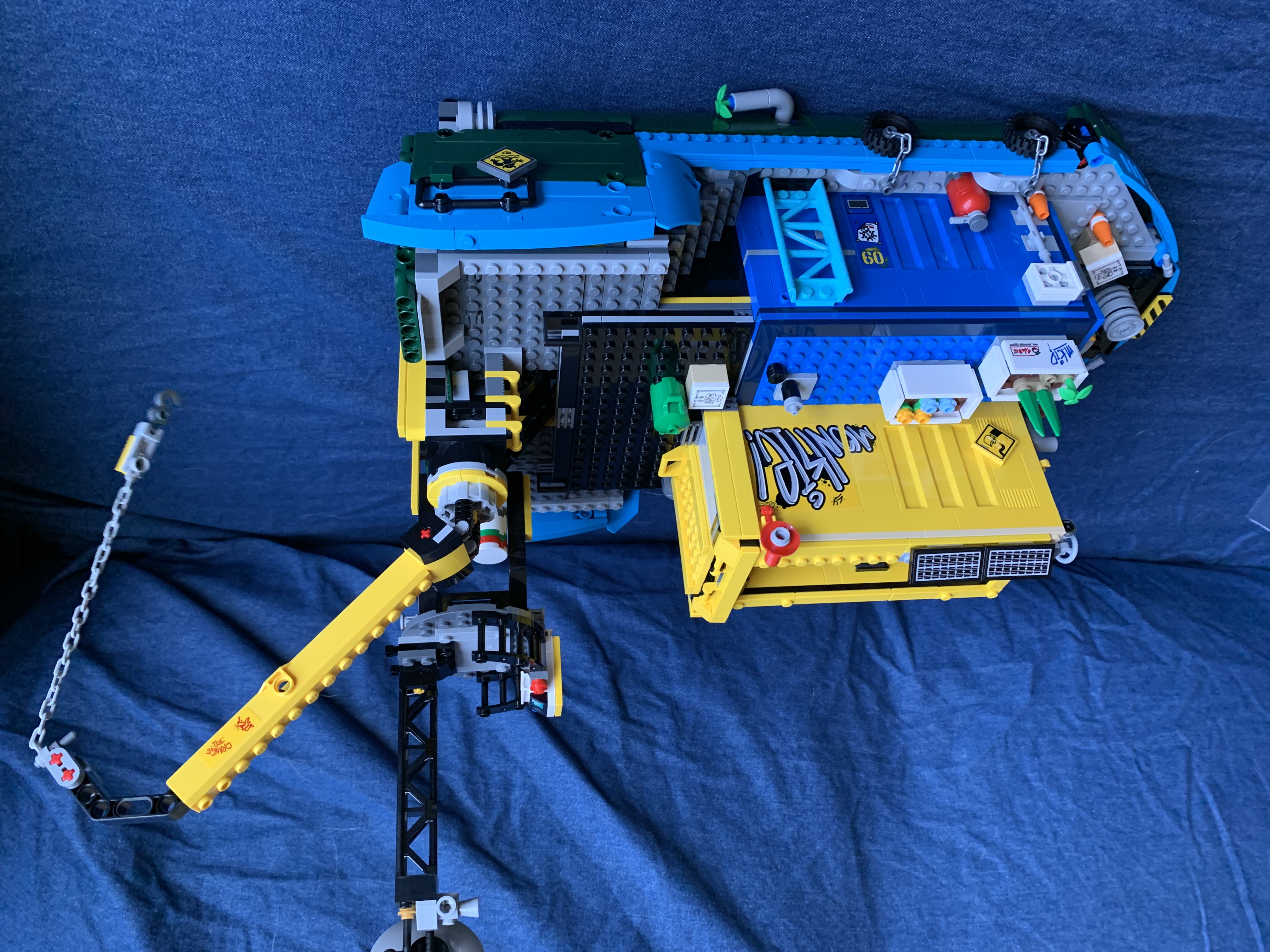 Though there's still some detail work to be added, you can actually combine the two parts now; they rely on a series of bar-and-clips to create hinges, which is a really good system, and never feels too difficult to pull apart OR put together.

The last bits are just some multi-colored shipping containers, which doesn't sound like much, but is really just a great way of adding to the grungy atmospheric and giving the boat a bit of height and weight without overburdening it. The crates rest on a few studs, making them easy to disassemble and remove when you need to re-open the boat, although I do kind of wish it could just combine as an entire unit rather than having to remove some bits. 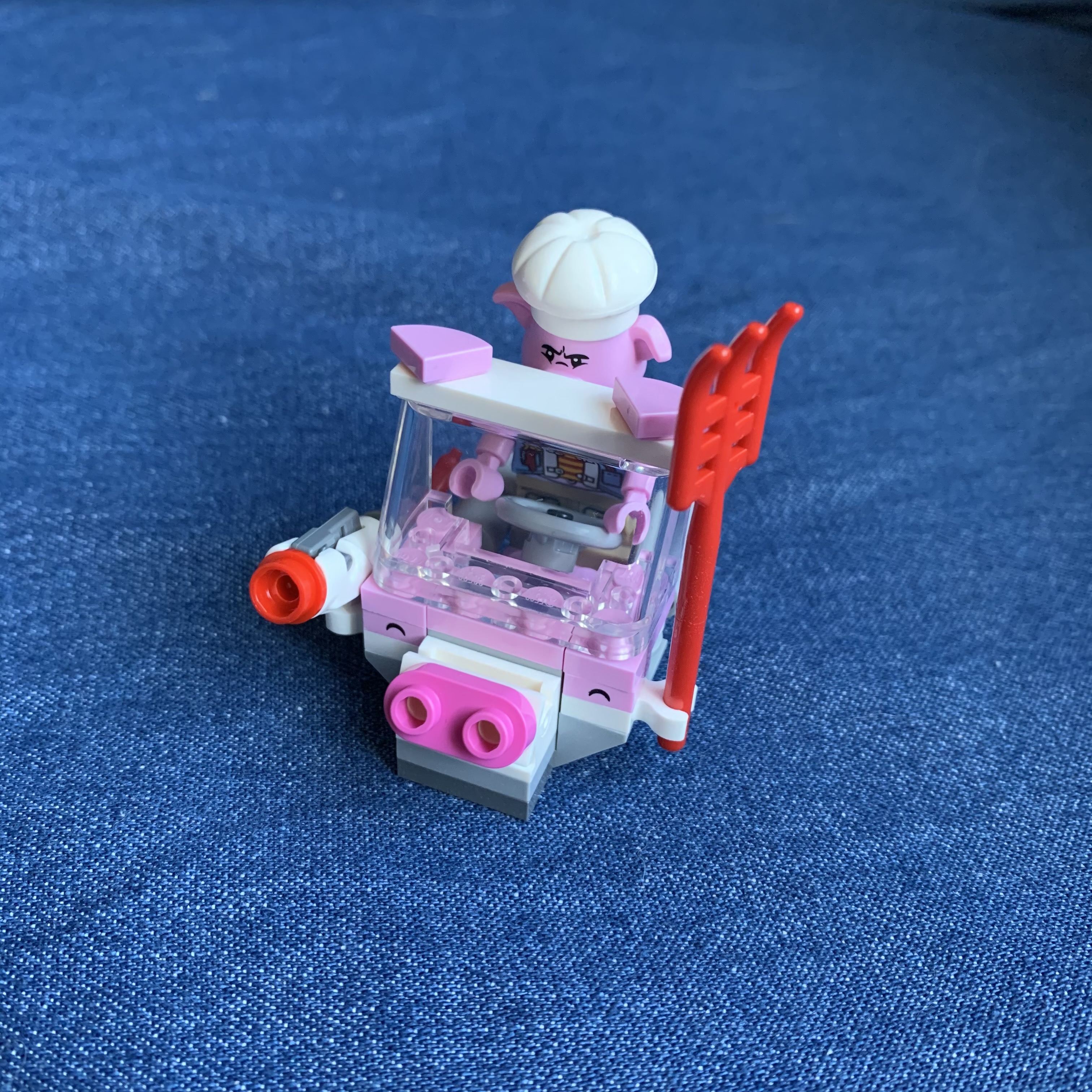 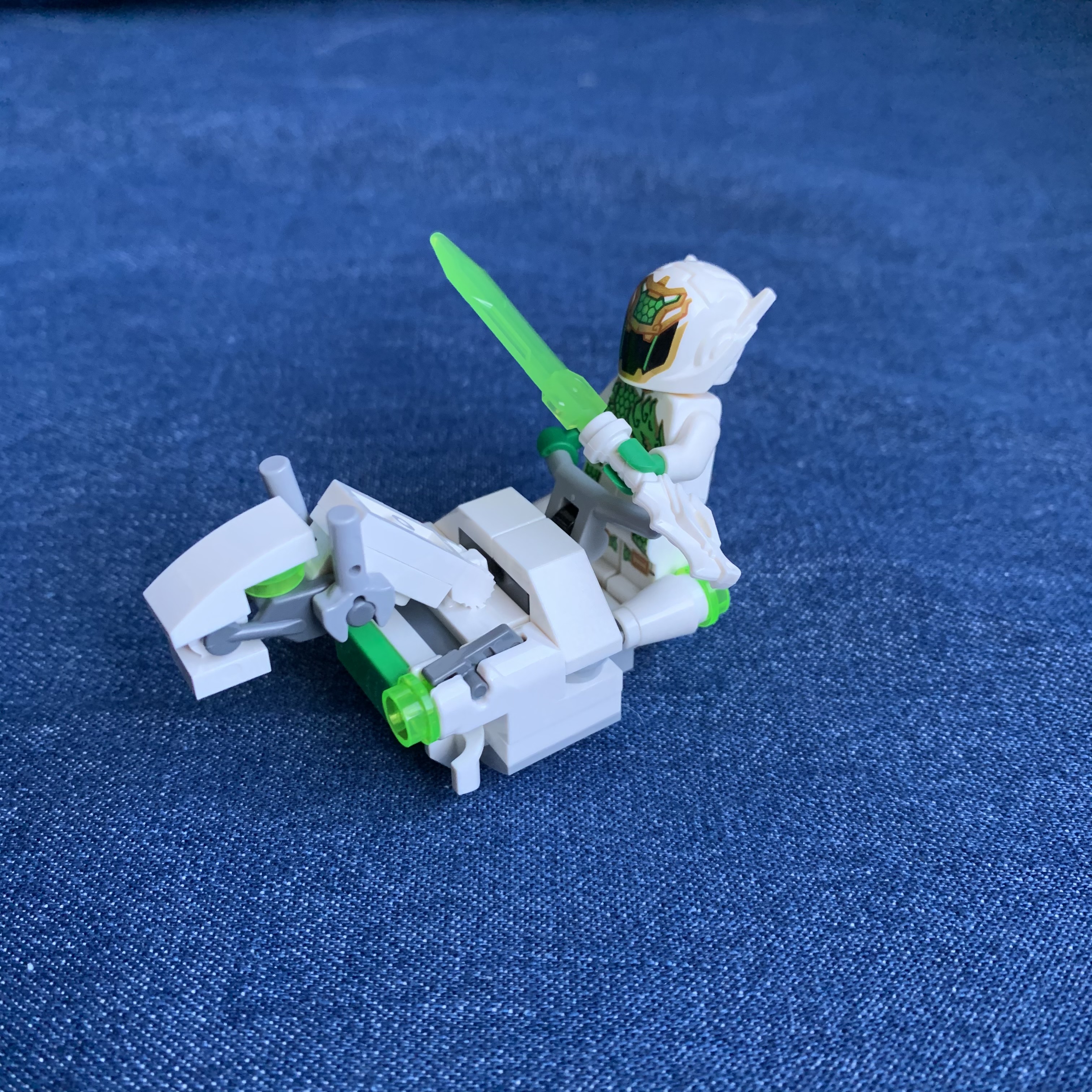 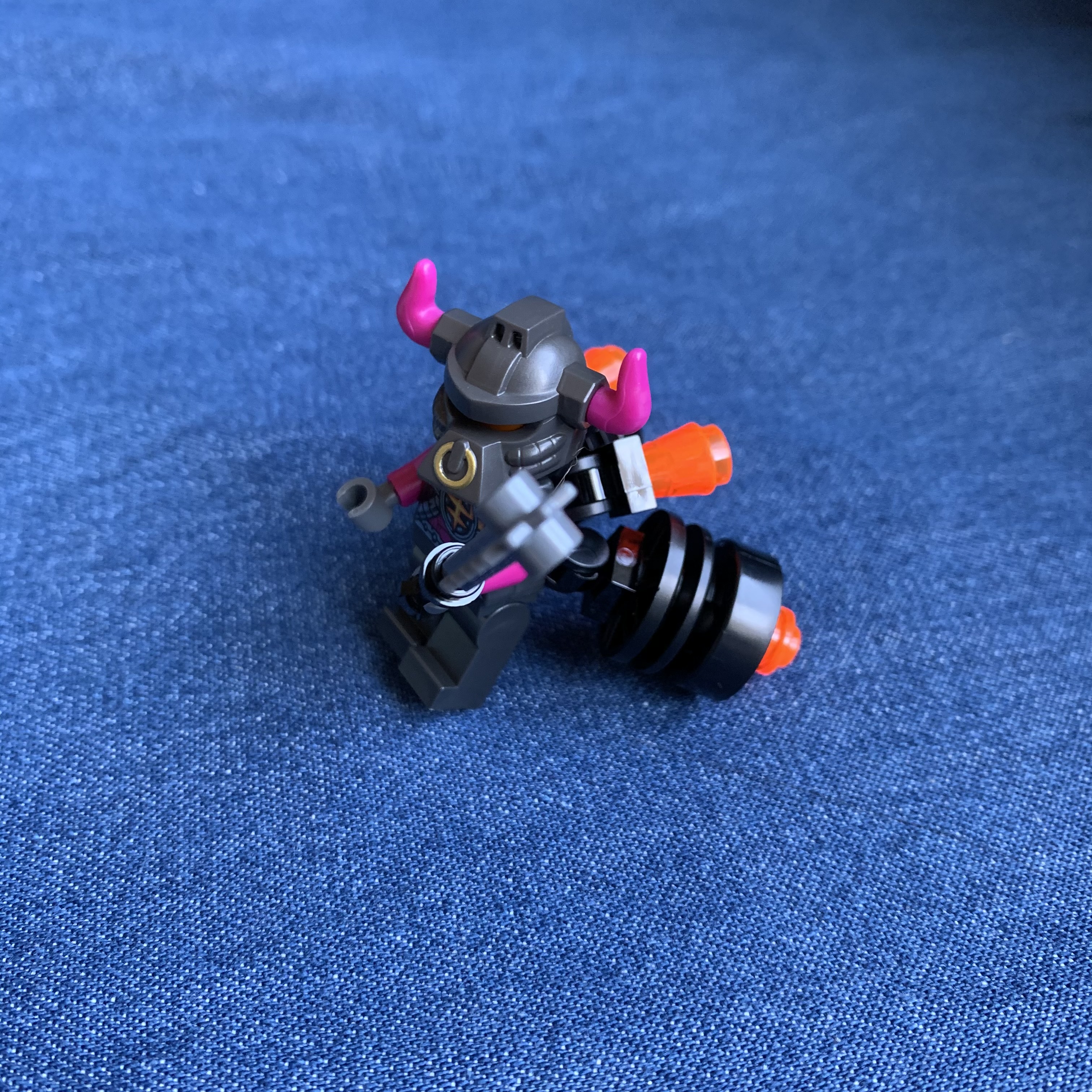 And lest you think we're done, we get capitalist swine extraordinaire Pigsy, who gets his own little pig-like skiff. But nobody cares him because there's Mei, an awesome dragon-warrior lady (I should really read up on the lore) who gets an infinitely better watercraft that's shaped like a dragon! Sure it's more "cute" than "cool" but it's miles ahead of Pigsy's dumb boat. Plus I dig her whole Sentai vibe (not to cross cultures or anything).

And also they gave another grunt a jetpack. Yay? 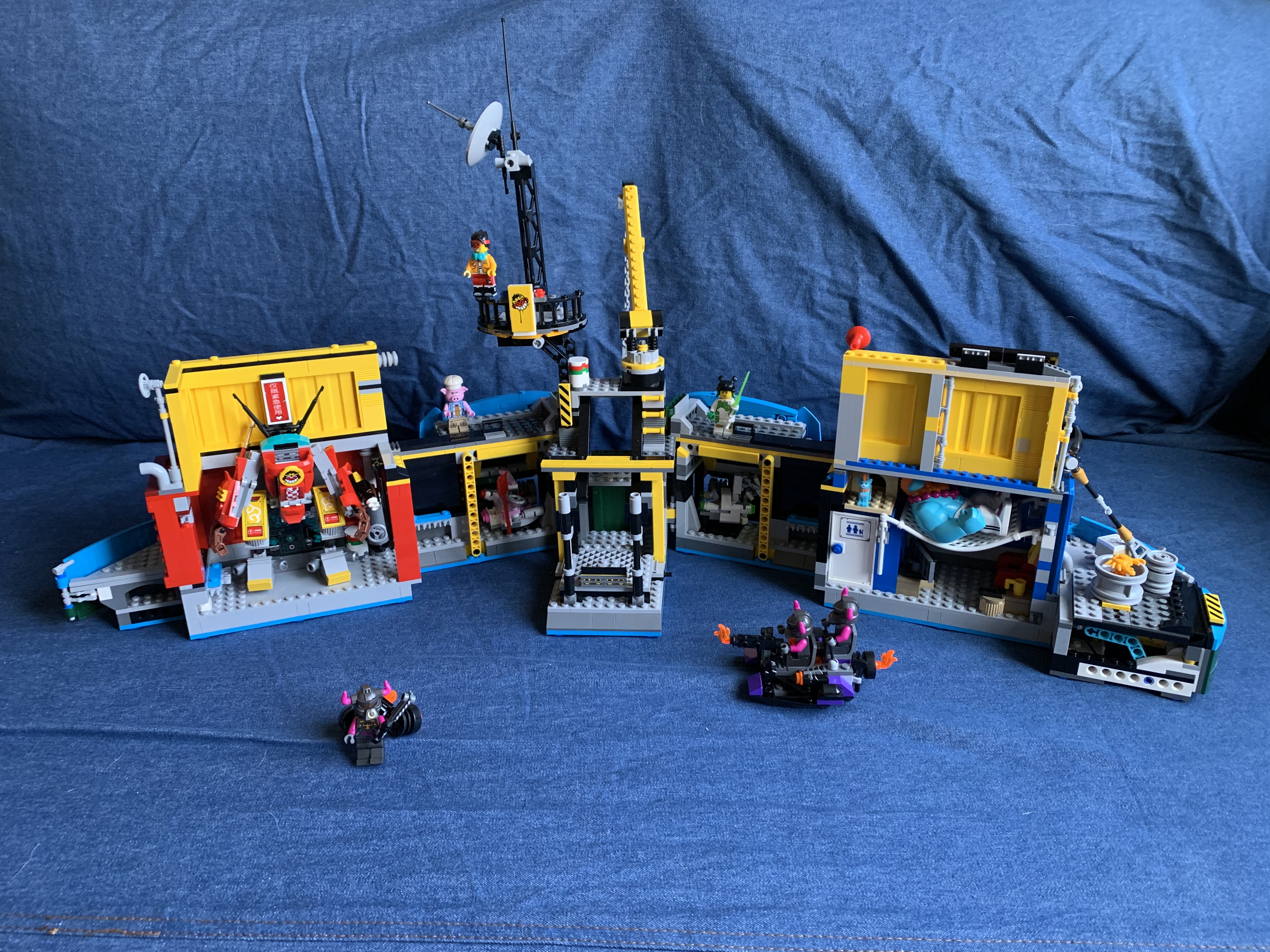 Quoth the great Mickey Mouse: "All ya gotta do is put it together". Once unfolded, everything has a proper place; the smaller boats fit in the side (minus the villain boat, but whatever), the mech goes in the more spacious hanger, and the giant blue bigfig dude kicks back in a hammock above the rec room.

The biggest set of the Monkie Kid line does not disappoint. It has a varied build that never gets too repetitive or boring, with a lot of eye-catching colors that still somehow manage to evoke the real-world design it's trying to emulate. Some of the smaller boats don't really feel necessary, but Mei's is awesome, and Monkie Kid has his own cool mini-mech that's fun to compare to the larger Monkey King version. And being able to pull the boat apart to look at all the various gizmos and references puts Pigsy's Food Truck to shame. Hopefully you've got some large shelves though!