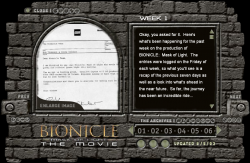 The Mask of Light Production Journal was a downloadable program on MaskofLight.com. It included eleven entries about progress on the then-upcoming movie: BIONICLE: Mask of Light. Each entry included an image, which can be seen with their corresponding entry below.

Okay, you asked for it. Here's what's been happening for the past week on the production of BIONICLE: Mask of Light. The entries were logged on the Friday of each week, so what you'll see is a recap of the previous seven days as well as a look into what's ahead in the near future. So far, the journey has been an incredible ride...

Treatment approved. Characters and initial storyline are finalized. Movie will be 70-minutes of CGI, 3D animation—the ideal medium to transform the Toa from action figures to screen heroes.

Now the search begins to find an animation partner and a screenwriter with the right sensibilities; filmmakers who "get" BIONICLE.

It's official - the BIONICLE: Mask of Light, the movie is greenlit and here's the memo.

Initial inquiries with literary agents have resulted in a flood of sample scripts. Many of the writers have quite impressive credits but it's about finding the right voice for our story. Lots of reading scheduled for this weekend. Dialogue will be critical since this is the first time the characters will actually speak.

Conversations are taking place with a variety of potential animation partners around the world. Expertise in CGI and 3D modeling is a must. More important, of course, will be their ability to conceptualize, from the initial sketches to the animatics, the BIONICLE universe and all its inhabitants. Admittedly, it's not an easy task!

Still reading scripts—the pile doesn't end and haven't found the right writer yet. Meanwhile, working with our toy group to breakdown the physicality of the toys. We want to understand how they will move and act when they are on screen. It's all good as we start to figure out how we'll bring them to life on screen.

The search for an animation partner continues...

Received some interesting proposals and samples reels from potential animation partners. Some really stand out as quite innovative. Planning to meet with a select few over the next weeks; UK, Germany, Scandinavia, Asia, and LA, jet-lagged expected...

Starting the meeting process with about 6-8 animation companies spread out around the world. Needless to say, my travel schedule is getting a bit insane but it's worth it if we can find the right partner.

Good news on the writer front-we've found our man, Henry Gilroy. Henry has an interesting list of credits from Star Wars comics to the Atlantis TV show. But what really won us over was his passion for life on Mata nui. He has strong conceptual vision that I think is going to blow everyone away. We're meeting in LA to figure out how to make this a great script.

The meetings with Henry are going great. It's amazing to sit around in a room all day and just talk about BIONICLE. Long hours but it's worth it. Although, I did get so tired I walked into a closed glass door. This would never have happened to Toa Tahu!

We've met with all the potential animation partners and have narrowed it down to 2 companies. Both can deliver to the schedule and budget. Now it's down to who creatively fits the project best. Both companies are going to make a short animation test using the BIONICLE characters. It's great that they can actually utilize our Maya animation files from our design group in order to save time.

2003 is going to be a big year for BIONICLE in so many different ways. Major meeting on Friday to develop concepts for software, web and everything else BIONICLE we're doing this year.

Henry delivered a "beat" outline of the script. Wow---blow away. Just so you know, a beat outline is a scene summary of the script. I've circulated it to the team hope to have notes back by next week.

Got the two animation reels, and I really can't believe how quickly they did it. They were both outstanding in really different ways. But one really nailed it. They took some liberties with the design but it made the acting believable. While we're just at the beginning of this, I can see already what's making the characters animate. It's in the eyes, face and hands.

Well the decision has been made and we put the call into our soon-to-be partners, Creative Capers. Creative Capers, a leading animation studio in Los Angeles are working with CGCG, a well-established Taiwanese animation house.

Now that we have the production company selected, myself and Martin Riber, lead designer on BIONICLE are scheduled to move to the US-LA here we come. We're going to stay at least through the 3 months pre-production phase-that's when all the character design and model building takes place. There's going to be a lot of long but gratifying hours of work ahead but I'm definitely going to check out the California surf.

We've asked Janice Ross, who's going to be working on the production (and our guide to LA) to help us scope out a place to live. We don't really case where it is so long as it's not too far from the surf.